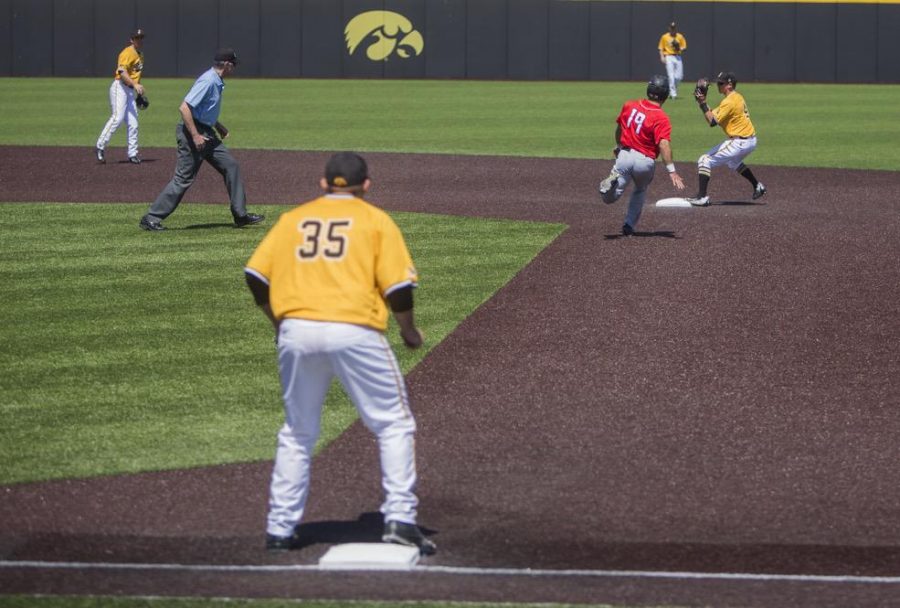 Iowa's Matt Hoeg turns a double play during today's game against Rutgers at Duane Banks Field on Sunday, April 23. The Scarlet Knights went on to defeat the Hawkeyes 13-5. (The Daily Iowan/Ben Smith)

The Iowa baseball team had a pretty good ending to its weekend against Ohio State.

After winning on May 12 and dropping a game on May 13, the Hawkeyes battled back from being down 7 in the seventh inning to win on Robert Neustrom’s 2-run walk-off home run in a 12-11 victory to cap off the Mother’s Day battle and take the series from the Buckeyes.

The Buckeyes jumped out to a 9-2 lead that lasted through six innings, but Iowa came back to life in the seventh inning on a 3-run homer from Jake Adams. The shot was Adams’ 19th of the season, moving him closer to the school record of 22.

After a Ben Norman RBI single, Iowa cut the lead to 9-6. Then, Corbin Woods came to the plate and blasted a huge 3-run shot to tie the game at 9.

Ohio State took the lead on a sacrifice fly in the top of the ninth, and things started to look a little worse for the Hawkeyes.

Adams then added another hit onto his stat line with a single in the bottom of the ninth to bring the winning run to the plate.

Neustrom stepped up, and the rest was history, as the sophomore right fielder crushed a 446-foot bomb to center field to give Iowa its third walk-off win of the year.

“I was telling myself all day, I have been struggling at the plate that I wanted to [do] something special when I got up that last at-bat,” Neustrom said in a release. “I saw the first pitch and thought I was going to hack at it.”

While the win on Sunday ended the weekend on a high note, its series-opening win on May 12 gave the team a satisfactory start.

Nick Gallagher continued his sensational Big Ten season, giving up 2 runs on 10 hits in 7 innings. The right-hander from Iowa City also struck out 9.

“It was one of those games where you knew it would be tough,” Gallagher said in a release. “They always battle; I had to continue to battle and the offense would pick me up.”

Gallagher moved his conference record to 4-0, while his ERA in Big Ten play is an outstanding 1.87.

Iowa led 9-2 heading into the ninth, but the Buckeyes scored 3 in the final frame to make the game a little closer. In the end, though, the result was never in question.

“We ended up making this game closer than it should have been, but we strung good at-bats up and down the lineup,” head coach Rick Heller said in a release after the win. “It was a good way to start the weekend; I was happy with the way we came out and played.”

Ohio State took the second game of the series, using 19 hits to overpower the Hawkeyes.

The Buckeyes led 8-1 after the top of the fifth, but Iowa stormed back to make it 8-7 through seven.

The Hawkeyes will take the field for their final home game on May 16, when they battle Nebraska-Omaha.