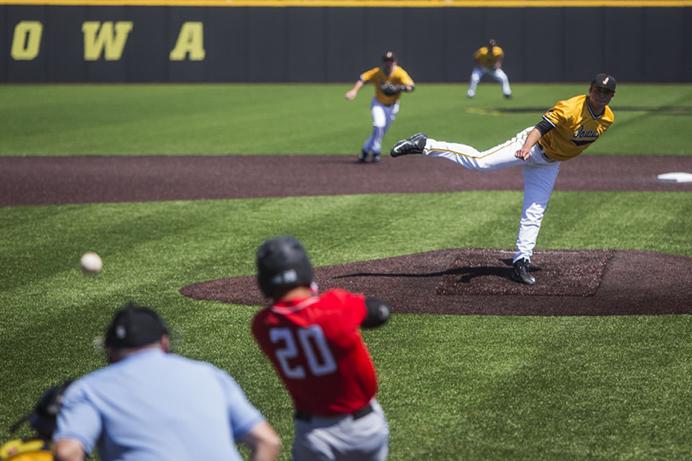 Iowa's Cole McDonald pitches during today's game against Rutgers at Duane Banks Field on Sunday, April 23. The Scarlet Knights went on to defeat the Hawkeyes 13-5. (The Daily Iowan/Ben Smith)

Four teams in the Big Ten enter this weekend with a 9-6 conference record in a tight race for third place.
Iowa (27-16) needs a series win against Michigan State (23-17) in order to keep pace and possibly move up in the standings.

Today’s game, which starts at 2:05 p.m. and can be watched on BTN2Go, comes after Iowa dropped a midweek rematch with Western Illinois.

Poor pitching and missed opportunities on offense led to a 7-5 defeat to the 17-win Leathernecks.

“We weren’t ready to play or ready to pitch,” head coach Rick Heller said in a release. “It was as bad of an outing as we’ve had in a game this season.”

Iowa tried to get something going in the pitching department, but things didn’t start well. Cole McDonald allowed the game’s first 2 runs in his 0.2 innings, and then Drake Robison followed up with a longer outing (2 innings) in which he allowed 4 runs on 3 hits.

The pitching was on full display, however, in Iowa’s last Big Ten series against Penn State.

Nick Gallagher and Ryan Erickson brought their A-games against Penn State in a double-header on April 28.

Gallagher racked up 10 strikeouts, the best performance of his career.

He also allowed just 2 runs on 3 hits through his 8 innings and did not walk a single batter.

“Nick had a hell of an outing,” Erickson said. “It was huge. It was one of those nights [where] everything was working.”

“I thought Ryan did a really good job,” Gallagher said. “He didn’t really know when we were going to start the second game, and he showed a lot of mental toughness. Being thrown in there at 10:30 at night, you never expect that.”

The Big Ten Pitcher of the Week will have his hands full with a high-scoring Spartan squad. Michigan State has scored double-digit runs in 12 contests to this point in the season (Iowa has reached double digits six times) and currently ranks second in the Big Ten in runs scored.

As much as Iowa’s power hitting improved this season, Michigan State is right there; the Spartans and Hawkeyes tie for fourth in the Big Ten in home runs.

Michigan State also ranks first in doubles and second in RBIs and ties for fourth in hits.

Iowa hasn’t scored more than 9 runs since April 7, a 14-2 win against Northwestern, but timely hits have sparked Hawkeye victories.

Trailing 1-0 to Penn State in the final game of the three-game series, Jake Adams crushed a 440-foot bomb over the left-field wall to tie the game in the bottom of the seventh.

Iowa exploded for 8 more runs through the rest of the inning as well as into the eighth.

“We fought all the way,” Adams said. “The pitchers did a good job at the mound, hitters stayed focused. It was a big series for us mentally and physically, to get the sweep.”

In the Spartans’ last Big Ten battle, they took two games against Northwestern in Evanston, Illinois. Michigan State cranked out 13 runs on 14 hits in its third-game win.

Shortstop Royce Ando went 4-for 5 with 2 RBIs. Two other Spartans, Brandon Hughes and Matt Byars, recorded 3 hits, and Byars had a team-high 3 RBIs.