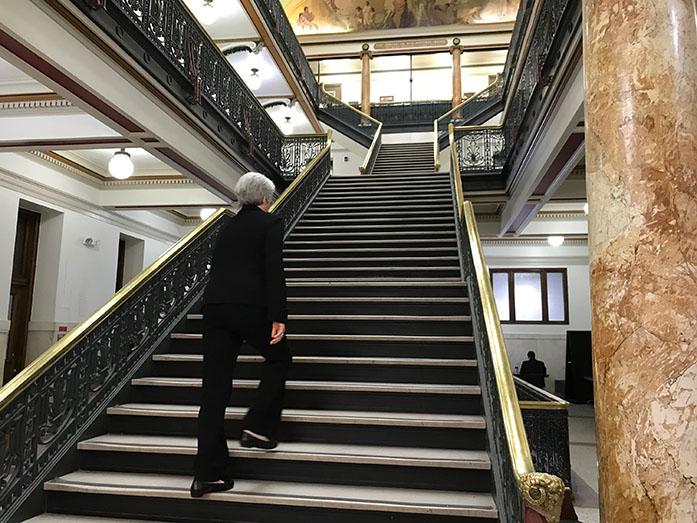 Jane Meyer walks up the stairs at the Polk County Courthouse Wednesday during the third day of her trial against the University of Iowa. Meyer took the stand Wednesday afternoon. (The Daily Iowan/Blake Dowson)

DES MOINES — Jurors on Wednesday began deliberating a lawsuit filed by a former athletics administrator who accuses the University of Iowa of discriminating against her because of her sexual orientation.

The case went to the eight-person jury after attorneys gave closing statements in the lawsuit filed by Jane Meyer, a Hawkeyes senior associate athletics director for more than a decade.

Meyer alleges she suffered workplace discrimination as a gay woman in a relationship with a coach, that the school retaliated against her, and that she was paid less than a male counterpart for similar work.

Thomas Newkirk, one of Meyer’s attorneys, said his client’s career in athletics is finished after what happened with the Hawkeyes.

“Everything Jane feared her whole time came true,” Newkirk said. “She finally came forward, and she was done.”

Meyer is seeking close to $400,000 in lost wages, and if the jury finds in favor of her on an emotional stress claim it can choose any amount to award her.

She filed the suit after being transferred to another department after the firing of her partner, Iowa field-hockey coach Tracey Griesbaum. Meyer’s job was eliminated in 2016.

Meyer’s lawyers closed their case by bringing up a memo — sent from Meyer to Barta a day before she was reassigned outside of athletics — that outlined many of the concerns of gender and sexual discrimination that ultimately led her to sue her former employer.

Meyer’s team also brought up an email from the university acknowledging that it was moving Meyer from the department because Griesbaum had threatened to sue the school and that she had made their relationship public through the media.

In summing up the state’s defense, Iowa Assistant Attorney General George Carroll told jurors, “This case is not about Tracey Griesbaum,” adding that Meyer was transferred outside of athletics because she had behaved “intolerably” in the months following Griesbaum’s firing. Carroll also argued that there’s no history of discrimination against gay coaches with the Hawkeyes.

Carroll also described complaints from Ferentz and Brands about working with Meyer on major facilities projects, and he pointed to testimony from university employees who said the atmosphere changed for the better after Meyer left.