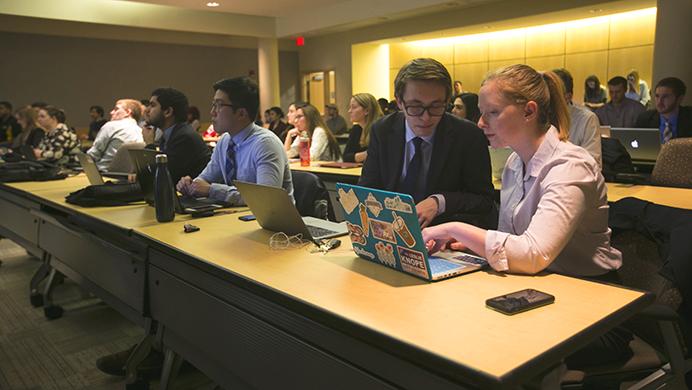 UISG Sen. Andy Han, Mitchell Dunn, and Jenna Pokorny present S.S.R. No. 25 prepare during a meeting on Tuesday, Feb. 28, 2017. S.S.R. No. 25 is an opposition bill against Iowa state Senator Jake Chapman’s SF256, which would allow weapons on regent universities. (The Daily Iowan/Joseph Cress)

[email protected]
The University of Iowa Student Government met for a final time this semester to decide on its budget for the 2017-18 legislative year.

The new budget highlights the initiatives and programs UISG plans to fund. The budget is broken down into tiers.

First, money goes to funding such services as Rape Victim Advocacy Program and the Food Pantry at Iowa. Next, it goes to funding collaboratively funded organizations such as SCOPE and Dance Marathon. Then money is allocated to the UISG Operational Budget.

“The budget is incredibly important because it helps set a couple things,” former UISG Senior Finance Director Titus Hou said. “One, it sets our agenda for the year in terms of how our administration plans on functioning, and then the other aspect of it is passing the operational budget and the student organization funding.”

A new initiative the budget plans to fund is a food grant, which was a campus climate initiative that winning ticket Bridge UI ran on.

“We wanted to support student organizations that would like to bring cultural food to their events,” UISG President Jacob Simpson said. “We know that food is extremely central to culture, and we want to make sure that students have the resources to have the food they want.”

The new administration also wants to work on being more transparent.

“One of the things that Jacob and his administration are adamant about is transparency, and that is one of the things I want to do [with the UISG budget],” Senior Finance Director Jeremy Vogel said.

Vogel plans to put reports up monthly that show what UISG has spent and what it spent the money on, along with a description about why it did.

UISG’s budget comes from the collective fund of the Student Activity Fee, which is paid by all UI students. The fee is $72 a year per student, which comes out to around $1.8 million.

“Our budgets are really crafted to be very intentional of how we plan on spending student dollars,” Hou said. “While we manage the funds, it’s not like we can just spend them [how we want]. The intention here is to make sure that we are helping students and making sure that those dollars are used most effectively.”

The money that makes up UISG’s budget is supposed to be funneled back into student programs and facilities that better life at the UI for everyone.

“It’s important to know that we are passing pretty large sums of money, and it’s important to make sure that students are aware that these things are happening because again it’s their dollars,” Hou said. “If they find something that they don’t want their money to be spent on, they should really reach out to us and have that conversation.”