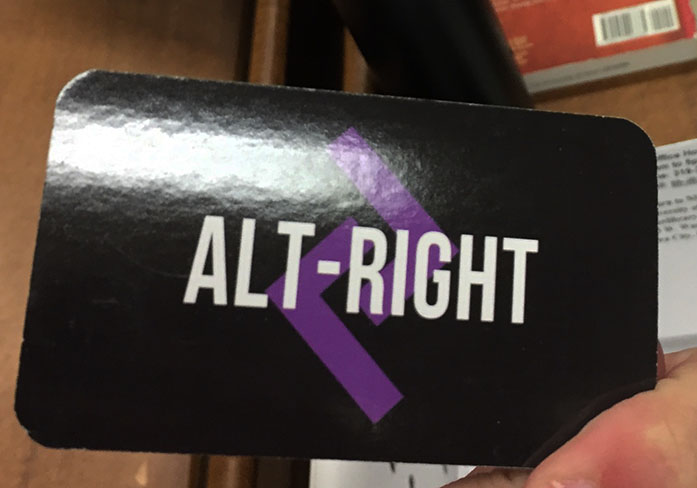 On Wednesday afternoon, it was reported that a white supremacy card was found in the University of Iowa main library. A photo of the card circulated on social media.

A Daily Iowan reporter who works at the library has come forward as being the student who found the white supremacy card Wednesday while taking inventory in the stacks. The staffer would like to remain anonymous in order to avoid backlash.

The DI staffer spoke with the Editor-in-Chief about the incident.

This is what they said:

“I was up in the stacks where I get books and I’m walking the Third Reich section and I look over and it’s sitting on a shelf. It caught my eye because it said “Make America Great Again” and anytime I see that, my brain is like, red alert. And I picked it up and flipped it over and saw the swastika and the websites. And I basically hustled out of there because I was worried. It looked brand new, it wasn’t dusty or anything. I was worried they were still up there. So I went back downstairs and I handed it to my supervisor.

It was in the Third Reich section, like Nazis. They aren’t even creative.

I think they assume that if someone’s in the Third Reich Nazi section, they’re doing it because they’re looking for justification for their views and then they see this alt-right Nazi website that’s like ‘hey, we’re here and this is a thing.’

It made me feel scared. I mean, granted, I’m white and I’m not exactly affected in the way that their hate might be targeted but also other intersections of my identity could be sources of targeting.

People seem to think that this sort of thing doesn’t exist on the campus but they are so wrong, especially when they see something like this.

It’s anonymous and we probably won’t be able to find out who put it there.

I’m curious to see the response to it. I feel bad for the library … but I’m interested to see how they respond to it in turn.”

Hayley Bruce, with the UI Department of Strategic Communication, said all the university could share at this time is a statement.

The statement is as follows:

The University of Iowa strives to be a safe and inclusive campus for everyone. Hateful messages do not reflect the values of our institution. We encourage our campus community to embrace diversity, demonstrate leadership, and be respectful of everyone that uses our shared space.”