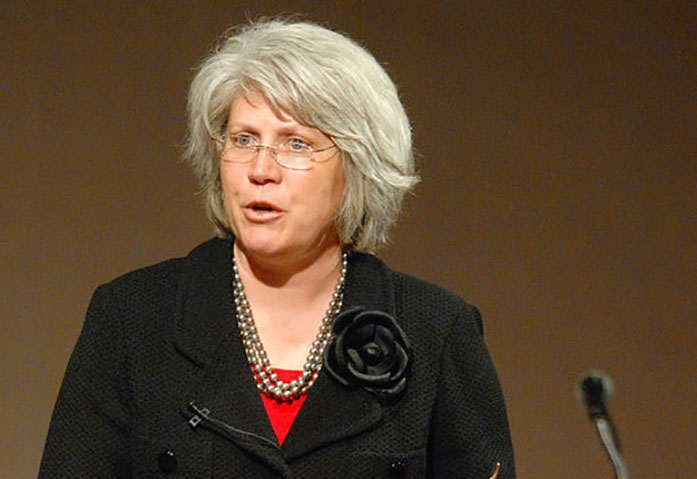 In this April 18, 2011 photo, Jane Meyer, senior associate athletic director at the University of Iowa, speaks in Normal, Ill. Meyer, the former no. 2 administrator for Iowa athletics will square off against the school in a trial beginning Monday, April 17, 2017, that centers on her claim that she suffered discrimination as a gay female who fought bias in college sports. The trial in a lawsuit brought by Meyer is expected to litigate whether Athletic Director Gary Barta's personnel moves were tough-but necessary judgment calls or tainted by discrimination. (Lori Ann Cook-Neisler/The Pantagraph via AP)

DES MOINES — University of Iowa Athletics Director Gary Barta said Monday that three rounds of complaints from parents and field-hockey players prompted an investigation into the program that ultimately led to the firing of coach Tracey Griesbaum in 2014.

Griesbaum’s termination is a central piece of a lawsuit filed by former Senior Associated Athletics Director Jane Meyer against the university.

Meyer, who was Barta’s top assistant for almost a decade, filed the suit after being moved to another department soon after the firing of Griesbaum, her partner. Meyer’s job was eliminated in 2016.

Meyer alleges she suffered workplace discrimination as a gay woman in a relationship with a coach, that the school retaliated against her, and that she was paid far less than a male counterpart for similar work.

Barta said he had noticed a pattern of serious issues and allegations of abuse regarding Griesbaum dating back to 2007, just a year after he took over at Iowa.

In 2011, another student made similar claims that were serious enough to be forwarded to then-President Sally Mason’s office and so distressed Griesbaum that she threatened to resign. Barta said nothing was proven, and Griesbaum stayed on as coach.

But Barta said that before the 2014 season, a player came forward with complaints again — and that a second player made similar charges a month later.

Barta said he had heard that, at one point, Griesbaum told a player that, “If I were you, I would kill myself.”

The university subsequently investigated the program and the relationship between Meyer and Griesbaum, who did not report to Meyer beyond athletics-facilities issues, and found no policy violations.

But Barta said his fears that such allegations would continue to surface, combined with the fact that Griesbaum had twice told him that she didn’t do anything wrong and wouldn’t change, led him to fire her just a few weeks before the season.

“Whether it could be finally proven or not, I had to make a decision,” Barta said.

He said that after Griesbaum’s firing, Meyer’s behavior became problematic and that faculty members and coaches registered complaints about her in the four months between when Griesbaum was dismissed and Meyer was transferred.

“It was to the point where I couldn’t run the athletics program with the way she was acting in that role,” Barta said. “I had to get her out of the Athletics Department. It was unworkable.”

Meyer’s attorneys closed their examination with Barta earlier Monday by continuing to push him on his knowledge of the relationship between Meyer and Griesbaum. Barta insisted that while he had heard rumors of their relationship beginning in 2011, he didn’t look into them further because they were only rumors.

When asked why he didn’t confront Meyer directly about what he was hearing, Barta said that “when they are rumors, I’m not going to go there unless I have something to substantiate it.”

Meyer’s attorneys were attempting to correlate Barta’s knowledge of Meyer and Griesbaum’s relationship to when Barta first began to note issues with Meyer in her performance reviews, which also began in 2011.

Barta informed Meyer in 2013 that he was reorganizing the department and that she wouldn’t be considered to be his deputy director, a post she had held since Barta’s hiring. Barta said he made the choice, in part, because she didn’t have the “trust and respect” of all of Iowa’s coaches.