Speculative thinking in science and art 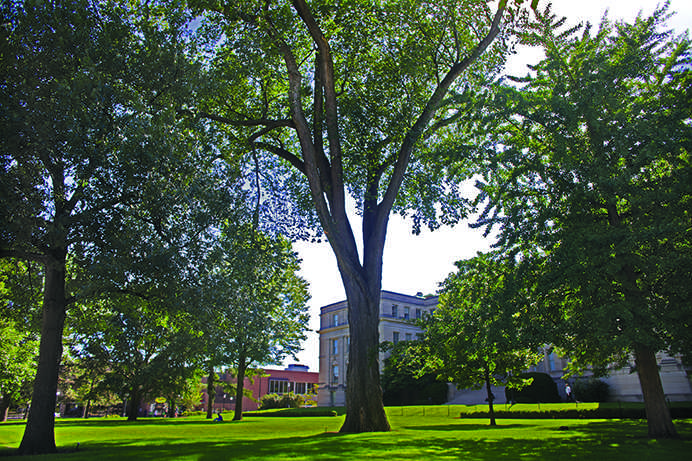 An elm tree, the notable survivor of dutch elm disease, stands outside of Schaeffer Hall on Thursday, July 30, 2015. The UI campus used to flourish with elm trees, particularly in the pentacrest. (The Daily Iowan/Lexi Brunk)

American-Israeli architect, designer, and Associate Professor Neri Oxman, in a lecture at the University of Iowa on April 20, discussed how collaboration and connection in her work and all fields can create art.
The University Lecture Committee hosted Oxman, an architect and faculty member at MIT, to discuss her work of creating art through her architectural projects.

“My goal for tonight is to leave with you with a little imprint of my thinking, and I hope some of it will inspire you to take it into your own work,” Oxman said.

Sheila Baker, a UI assistant professor of biochemistry and member of the University Lecture Committee, was more than happy to hear Oxman’s talk.

“I’m really excited that Neri Oxman is here,” she said. “I think her work is so innovative and inspiring for everyone.”

Baker runs a research lab in which the molecular biology of vision is studied.

“As a scientist, I have always struggled with ‘science is one tower’ and ‘art is another’ [because] that is how I was taught, but they are not, and I learned that the hard way,” Baker said. “And people like Neri have always known that, and that’s why they are so successful and why they can push boundaries.”

Oxman’s ability to combine materials, science, what people wear, and biology is something that caught her imagination, Baker said.

“I’m really passionate about Neri’s core message, and I think everyone needs to hear it,” Baker said.

When Oxman started her Ph.D. at MIT, she said, she wondered why the engineering tools were so high in resolution but the actual object of desire’s resolution was finite.

Shortly after, she created the Mediated Matter group, in which the members dealt with those questions of clash between the age of medicine and assembly and the age biology and growth.

Oxman also discussed property variant and posed the question why builders separate between filters and barriers and scientists and engineers.

“Something is happening in today’s culture,” she said. “Scientists [and other professionals] are able to think of the anatomy of the object but also of the physiology of the object and how that relates to the environment.”

In order to do that, different disciplines need to be connected and mediated between biological, physical, and digital, Oxman said. These disciplines include design, manufacturing, engineering, and biology.

Throughout the rest of Oxman’s talk, she discussed her work between her and her colleagues that included cross-disciplinary collaboration in order to create.

“I feel like we need to create more things that can’t be measured,” she said at a student discussion held earlier on the same day. “Speculative thinking can apply to science, to art, to design, to your life, to your relationships, so I think this kind of way of thinking is really important.”