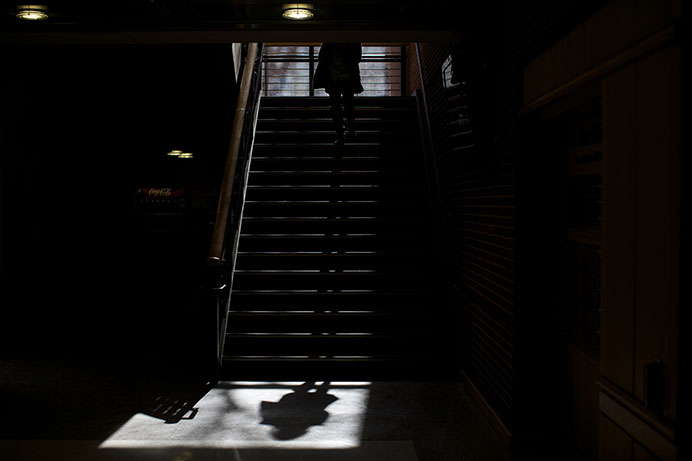 I was sitting in my French class about a week ago when I overheard a conversation that truly shocked me. A student was talking about how he was robbed. It started out as a sad story, but then at the very end of it he said something along the lines of “I understand it, though, because they were black.”

Any normal person would find this offensive, but the kicker for me was when he said this, he looked directly at me, even locked eyes with me. Then he laughed.
I was furious. I asked him why he would say that, and he said that because they were black, he figured they would rob him. I told him that was racist, to which he said, “That’s not racist, that’s just a fact.”

This caught me off-guard. He went on to explain he couldn’t possibly be racist because “he had black friends,” something that I’ve heard many times since coming to Iowa. He then said I was not like the people who robbed him because I didn’t “act black.”

The truth is, no matter what he thought, what he said was indeed racist, and I was shocked that he had the nerve to say it directly to my face. Of course, if I had reacted violently, I would have only fueled the stereotype and, in turn, proved him right.

In this world, everything has a stereotype. Men are tough, women are submissive, rich kids are spoiled, black people are “ghetto.” Obviously, however, all of these statements are untrue when applied to an entire group.

That’s just how these groups have been portrayed in the media. The media has a lot to do with how society views certain things, and a lot of it can create negative views of people.

One of the stereotypes that I have to deal with every day is the black-male image. While the kid who said that to me in my French class wasn’t black, I have heard comments about what it meant to “be black” from both the black and white communities. I find it ironic that the African-American community can fight so hard for equality while at the same time advocate stereotypes of what it means to “be black.”

“You talk white,” “You’re an Oreo,” and “You’re the whitest black kid I know” are all phrases that I have heard from both black people and white people and are phrases I find to be incredibly annoying.

I’ve also gotten comments such as “you dress black, but you talk white,” or “I’m blacker than you, and I’m white.” To those comments I say, there is no way one can dress or talk in a way that defines race. On top of this, stating you act more black than me makes zero sense, since in reality I have always been black and the person who said that has always grown up with white privilege. Thus, unless you have black skin, you can never know what it truly means to be black.

Acting black is just a cruel way of saying acting like a stereotype. A stereotype that is unprofessional, violent, and “ghetto.” I did grow up in a ghetto, and there is no pride in stating that you grew up in gangs, stole bikes as a kid, or got in fights at school. It only furthers the negative picture that the world and the media perpetuate of black men and women.

Judging someone based on “blackness” is racist, and saying otherwise is truly hypocritical.