The University of Iowa mulls creating a quidditch team. 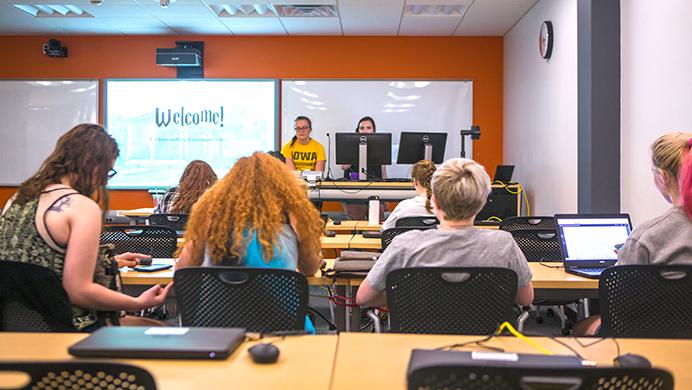 Quidditch club members meet for the first time at the Lindquist Center on Monday, April 17, 2017. The club is currently trying to obtain team certification from the University. (The Daily Iowan/Ben Smith)

Hogwarts School of Witchcraft and Wizardry came to the University of Iowa Monday for the first Quidditch Club informational meeting.

Quidditch, a sport inspired by the Harry Potter novels, is played with seven players on both teams.
According to the U.S. Quidditch website, a nonprofit organization that governs the sport of Quidditch in this country, a team consists of three chasers, who try to score points; two beaters, who try to prevent the other team from scoring; a keeper, who acts as a goalie; and a seeker, who tries to catch the snitch — as opposed to the usual 10 points for a standard goal, the snitch is worth 30 points.

The snitch, who does not play for either team and is portrayed by a runner dressed in yellow with a Velcro tail attached to the shorts, is released onto the field at the 18th minute of play the once captured, the game is over.

Lily Neumann, the president and cofounder of the Iowa Quidditch Club, said, “We’re not official yet, but we’ve been talking to the university. [The university] is trying to gauge interest, so that’s part of the reason we’re having this meeting.”

Neumann said that hopefully by the fall, the Iowa Quidditch team will be official and could compete in tournaments.

Lauren Bisgard, the vice president and cofounder of the club, said she is excited about the UI having a team.

“When I came to Iowa, I was excited when I saw Iowa Quidditch T-shirts in the gift shop. But then I figured out there wasn’t a team — we tried to start a team last year, but we got caught up in our freshman year,” Bisgard said.

U.S. Quidditch was established in 2010. According to the website, there are currently 200 teams nationwide that serve more than 4,000 athletes.

The website also states that U.S. Quidditch provides a variety of services such as “hosting nine major tournaments and supervising regular season competition, to training and certifying referees, snitches, and tournament directors, offering grants, and working to expand the sport into younger age groups through outreach programs at the elementary, middle, and high school levels.”

Bisgard, who also works for mugglenet.com, a Harry Potter fan site, described herself as a big Quidditch fan.

Bisgard said she has been in contact with Iowa State’s Quidditch team, which has been playing since 2005.

Mac McCollough, who attended the informational meeting, said he is excited for the UI to have a team.

“Lily asked me to come to the meeting,” he said. “I’ve been looking for an organized sports team, but it’s hard to find. It’s a bit hard to find a pickup team. I’ve seen all the [Harry Potter] movies, and I’m working my way through the books. Because I played a defensive position in soccer, I can see myself as a beater in quidditch.”