The University of Iowa held the 2017 Provost’s Global Forum on Women’s Health and the Environment: Going Up in Smoke this past weekend. 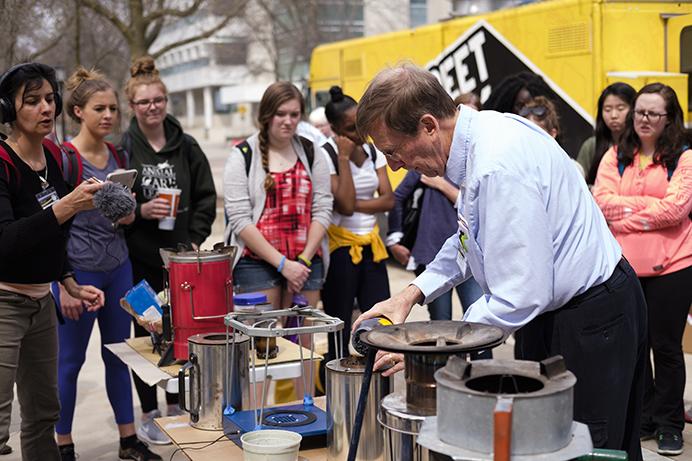 Paul Anderson demonstrates different cook stoves at the Provost's Global Forum on Wednesday April 12, 2017. The forum runs through Friday. This year's theme is Women's Health & the Environment: Up in Smoke. (The Daily Iowan/Nick Rohlman)

A health and environmental crisis facing nearly half of the world’s people made its way into conversations at the University of Iowa last week.
This year’s Provost’s Global Forum was held from April 12 to 14 in which experts discussed the effects of smoke from cooking stoves can have on health and the environment.

“About half of the world’s population cooks with firewood on some kind of hearth, and the atmospheric pollution from that accounts for about 20 percent of the atmospheric pollutants in the world,” said Jerry Anthony, a UI associate professor of urban and regional planning who was also one of the event organizers.

As women cook, they inhale smoke from stoves, which is full of hazardous chemicals and materials, Anthony said. Additionally, he said, 4 million women die from indoor air pollution.

These stoves also lead to deforestation, because people cut down trees close to where they live for their fires, he said.

“What we are trying to do is spread some awareness about the problem on campus and in the area,” Anthony said. “And also start conversations among people who have been researching this for several years, as well as working out in the field trying to make changes on the field.”

The forum started April 12 with the Joel Barkan Memorial Lecture, followed by a cooking-stove demonstration to show not only how it works but also how the smoke emission can cause health and environmental issues.

The event concluded with a “WorldCanvass” talk titled “Women’s Health and the Environment: Going Up in Smoke.” The three-part talk focused on cooking stoves and the environment, the health consequences of burning biomass, and potential policy solutions.

UI engineering Professor H.S. Udaykumar, part of the “WorldCanvass” show, said many people don’t realize the effect cooking and smoke emission has on environment and heath.

Women in India, as in most cultures, cook in their residences, in which there is almost no opening for the smoke to leave the house, he said. That causes health problems.

“The women we met are in fact cooking in a corner away from the doors and so on for privacy,” he said. “So they are cooking in fact at the place in the home where it is the worst place to cook.”

This causes smoke to accumulate in the home, he said.

“This alarms numbers of people,” he said. “Industries contribute greatly to air pollution, but if you look at it … the very act of cooking actually does carry a huge footprint on [carbon pollution].”

After some observation, Rao and his team developed a small crate on an elevated platform with holes that would allow air flow from people’s cooking stoves.

“I wanted to do something that would impact them,” he said. “We tried it out, and the first household we tried it at it reduced [smoke] by 60 percent. We were shocked.”

The remainder of the forum saw keynote presentations, panel discussions, and film screenings, all relating to global health and environmental issues.