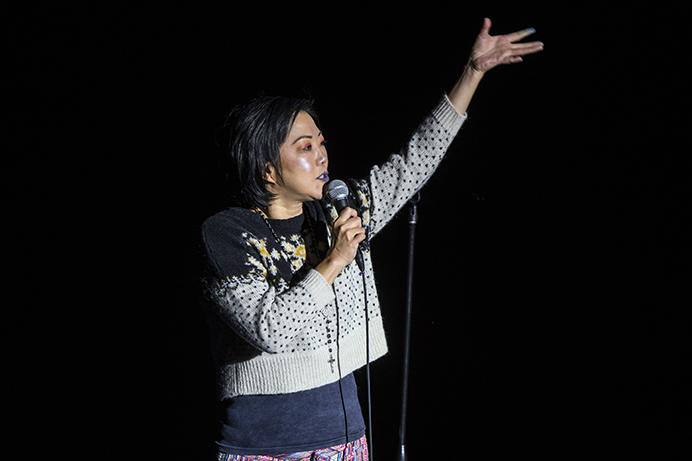 Comedian Margaret Cho performs at The Englert Theatre during Mission Creek Festival on Thursday, April 6, 2017. Cho is best known for her social and political commentary, particularly in support of the LGBT community. (The Daily Iowan/Ben Smith)

As another year of Mission Creek comes to a close, and the wrist bands and festival passes move from the arms of avid concertgoers to the streets of Iowa City, The Daily Iowan Arts and Culture staff takes a moment to reflect on the best moments of the past five days. In a week that saw rap icons such as Ghostface Killah perform on the same stage as legendary comedian Margaret Cho, audiences at events across the festival’s many venues had the opportunity to witness the power of the arts on full display.

A young crowd of high-spirited individuals gathered for a night of freedom and excitement provided by gender/queer rapper and performance artist Mykki Blanco. More notable than Blanco’s rapping capabilities were the theatricality and daringness brought to the show. Taking on the persona of a girl writing in her diary or of a gladiator swinging the mic stand at the crowd like a club, Blanco strongly committed to the art of her performance.

Equal commitment was realized in a different form under the lights of Hancher’s beautiful Strauss Hall, as devout fans of literature and aspiring writers sat down to hear a reading from multi-genre author Kelly Link. The Pulitzer Prize finalist functioned as a ghost-story teller by the campfire, depicting the tale of an actress’ run-ins with fame, a demon lover, and a missing nudist colony. Following her reading, Link sat down for an open Q&A session in which writers in the audience gained insight and valuable lessons from an author that they hold in high esteem.

Music wasn’t the only art  represented on the lineup; people gathered in various locations in central Iowa City from White Rabbit to Yacht Club for the seventh-annual Lit Crawl, hoping to see publishers and authors in the UNESCO City of Literature. People who spoke included the likes of the local Iowa Youth Writing Project and author Garth Greenwell, who read from his acclaimed National Book Award-nominated What Belongs to You.

Several Buzzfeed writers and writers-adjacent, Isaac Fitzgerlad, Saeed Jones, and Alice Sola Kim all read at the Mill, recounting experiences of weight loss and body-image issues to fictional accounts of finding one’s place in a space that does not want you and navigating a leather-daddy conference in Chicago.

Screams of excitement and star-struck grins welcomed Canadian-American pop singer Rufus Wainwright to Iowa City. Only accompanied by a single guitar or piano or even once a cappella, Wainwright’s powerful and pop-oriented tenor voice cut through the Englert with emotion, jumping through notes with ease. His cheeky humor and undeniably cool yet kind attitude left the audience swooning with laughter.

Opening for Wainwright was singer-songwriter Laura Gibson. She also performed solely with self-instrumentation, bringing a raw and simple sound. Her soft, folksy voice drew in applause from an unknowing audience who came to love her genuine artistry. The singer’s music touched at very personal moments in her life, striking at the core of human emotions.

Another well-known performer — one local to the area — was Pieta Brown, an Americana singer/songwriter with a penchant for poetry and music in her genes. These factors come together to create a sound that many can place on first listen. 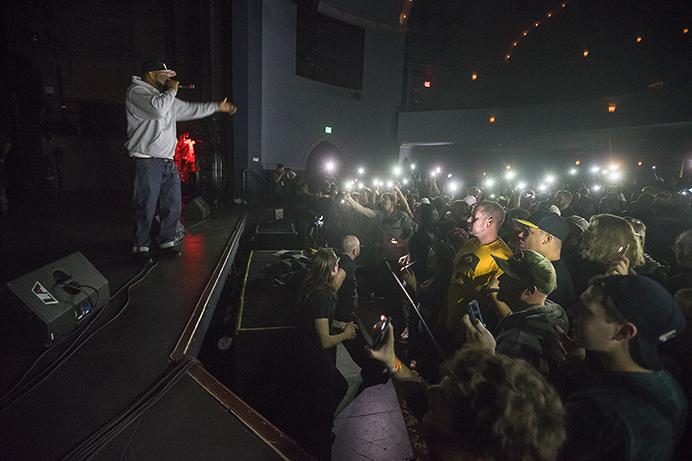 However, she was not the only local songstress in the Mission Creek Lineup. Another included Elizabeth Moen, whose voice and talent recently took her on a tour throughout Europe. Now, the songbird has returned back to Iowa City. Moen’s songwriting has really begun to show through, with a relaxed presence onstage in an honest, soulful performance.

As Englert goers threw up the iconic Wu-Tang “W,” chanted along to verses, and even danced up on stage, it was clear that they had far from forgotten about the popular ’90s hip-hop group. Ghostface Killah, founding member of the original Wu-Tang Clan, performed classic hits to a raving crowd at the Englert. The dynamic verses and lyrical intensity from Ghostface and thunderous beats from the DJ commanded the crowd to their feet, making the seats of the theater obsolete.

Another anticipated and renowned rap act, duo the Cool Kids, played at Blue Moose. While the group, consisting of Antoine “Sir Michael Rocks” Reed and Evan “Chuck Inglish” Ingersoll, make their own beats and raps, and are also known for their collaborations with many well known hip-hop artists. Some of those names include Asher Roth, Mac Miller, Ludacris, Lil Wayne, Drake, Kid Cudi, King Chip, and fellow Mission Creek performer, Ghostface Killah.

Another of the festival’s headliners, Margaret Cho, graced a crowd of eager Mission Creek audiences with her signature shamelessness and vulgarity on the Englert stage. Jokes about her being  promiscuous left the crowd disgusted with laughter. Many audience members were unsure of how to respond to Cho’s material, nervously glancing at their peers or just flat-out screaming in shock. It was a night of controversial and uproarious laughter.