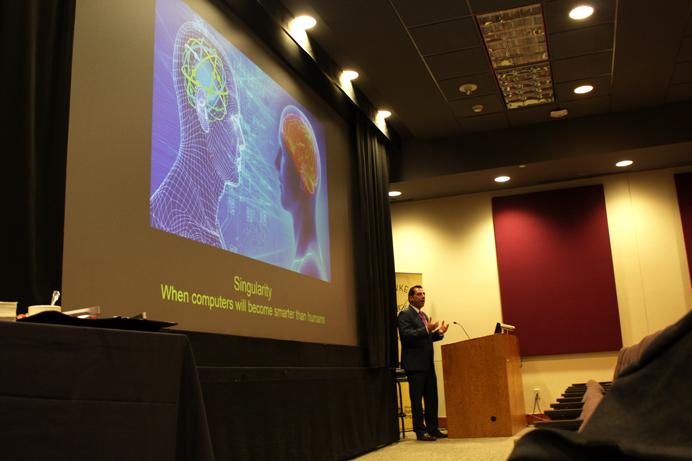 The Daily Iowan; Photos by Lisa

Karim Abdel-Malek, Director of CCAD, discusses the increasing role of technology at a Lunch & Learn Lecture on The Virtual Soldier in the IMU on Thursday, April 6, 2017. The Virtual Soldier Research Program has created a both a male and female versions of virtual humans, Santos and Sophia. (The Daily Iowan/Lisa Dauterive)

A U.S. soldier stands in the battlefield, exposed to possible injury. However, with the latest updates in virtual-reality research, he may be able to make it through — and the University of Iowa is part of that discovery.

UI biomedical engineering Professor Karim Abdel-Malek spoke at the IMU on Thursday afternoon about the Virtual Soldier Research Program. The discussion was the latest installment of the Hawkeye Lunch & Learn series.
The Daily Iowan reported last year that the Office of Naval Research granted the UI $2.6 million for the program. The aim of the research was to help better predict and prevent musculoskeletal injuries for individuals in the Marine Corps — a common medical issue in the military. Engineers collaborated with the UI Athletics Department and Physiology Department to more effectively collect information on preventing injuries.

Associate Provost for Outreach & Engagement Linda Snetselaar said she wanted to host an event about the virtual-reality simulator so students could learn about its influence.

“The Hawkeye Lunch & Learn lecture series provides a unique opportunity to share University of Iowa knowledge and expertise with Iowans,” she said. “We were very excited to highlight Abdel-Malek’s research in the Hawkeye Lunch & Learn lecture series this month, because his work with Santos approaches ‘Our Lives Online’ in a unique, more literal sense.”

The Virtual Soldier program is an independent research group located in the UI specializing in digital human modeling. Researchers are able to generate a virtual setting by using a virtual human named Santos.

Abdel-Malek said Santos has been used in the university’s research facility for 13 years. It was first conceptualized when professors were doing research on robotics and used math to predict how humans could move, he said.

So far, one of the most significant landmarks the program has made is inhibiting injury prevention in its module, Abdel-Malek said.

UI junior Matt Wipfler is a member of the program who works to advance the virtual-reality technology.

“A lot of virtual reality deals with modeling, and in this case, human modeling. For us, it has a vast array of benefits,” he said. “Now that we’re working with injury prevention, this enables us to have the avatar behave like it does in the real world. We have it do tests and analyses that would otherwise be impossible.”

The way to enter the virtual world has several pathways. Wipfler said the avatar must be adjusted to the same measurements as the human participant. After the avatar corresponds to the real-life counterpart, users can specify what they want the avatar to do. The team can also put in motion capture on real people and have their avatar copy that motion.

Although they’ve accomplished a great deal through this project, Abdel-Malek said, he hopes to advance Santos even further.

“We hope to make [Santos] even smarter, to have more artificial intelligence. We’re all trying to have it model the brain, so the computer will be smarter than the human,” he said. “We want to study different types of people and emulate them. We also want to predict injuries and human performance.”

Jade Manternach, the program coordinator for UI Outreach and Engagement Program, said having Abdel-Malek present his work to the community was a great addition to the theme semester.

“The activities for the Our Lives Online theme semester were curated to reflect diverse perspectives of our increasingly digital world,” she said. “We aim to leave participants with a deeper understanding of the complexity of our connected lives and encourage them to make intentional choices.”