Stop the Hate rally on the Pentacrest calls for a boycott and justice for workers. 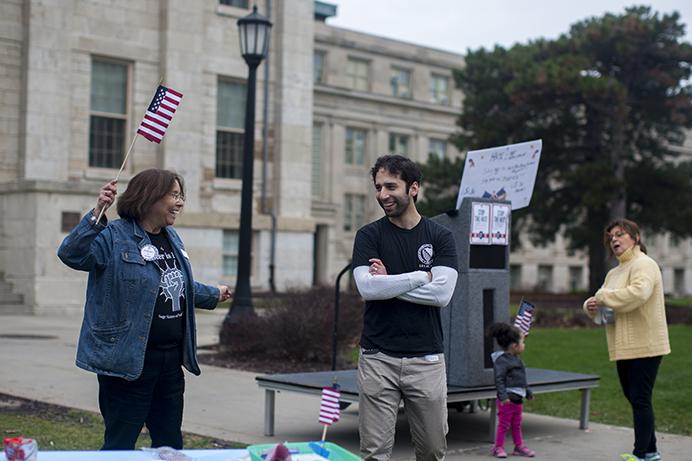 Maria Bribriesco, the Deputy State Director of LULAC, and Andrew Bribriesco at the LULAC/worker's rally in front of the Old Capitol on March 30, 2017. The organization LULAC has about 16 different councils and 500 members in the state of Iowa. (The Daily Iowan/Kenny Sim)

A group of Iowa City community members are speaking out against what they say is “racist rhetoric” coming from one state leader.

In honor of Cesar Chavez Day, the League of United Latin American Citizens held a rally in response to “racist rhetoric” by Rep. Steve King, R-Iowa, according to an event page on Facebook.
Andrew Bribriesco, the group’s Council No. 308 (Iowa City) president, said the rally on March 31 had three components.

The first was to honor Chavez, a legendary figure who fought for human rights for farm workers in California. Bribriesco sees Chavez as a rallying point.

“[Chavez’s] big efforts were done through nonviolent means: hunger strikes and boycotting,” Bribriesco said. “The great boycott was in the 1960s and ’70s, and that led to a lot of change, and that’s change based on a boycott, economic protest.”

The second component was inspired by Chavez’s boycotts, Bribriesco said.

“LULAC of Iowa has declared a boycott against the biggest contributor to Steve King’s campaign, which is Wells Blue Bunny,” he said. “Rep. King, as I’m sure most know, has done a lot of hateful things recently.”

Bribriesco specifically referred to a recent King tweet that said, “We can’t restore our civilization with somebody else’s babies.”

University of Iowa student Faviola Santana, the Latino League college liaison, said she was surprised King, who uses such rhetoric, could hold such a high position in government.

“We don’t stand for his rhetoric …” Santana said. “He’s extremely offensive toward the Latino community.”

Maria Bribriesco, deputy state director and political director of the league, said the power that corporations such as Wells Blue Bunny have is another issue that needs to be addressed.

The third component of the rally is to address recent attacks on workers by some Iowa representatives.

“Gov. [Terry] Branstad signed the new workers’ compensation law, which is going to dramatically affect those in high-risk occupations,” Andrew Bribriesco said. “That includes the meatpacking industry, which is primarily Latino and immigrant labor.”

He said that although the Latino League has a focus on the Latino community, this law is going to affect all workers.

“[These speakers] don’t just show up for this one event,” Santana said. “They’re constantly advocating for Latino rights, African-American rights, and LGBT rights.”

There were also tables at which people could register to vote.

“We have the power,” Maria Bribriesco said. “As citizens, as people, this is our government, and we’re going to take it back. When we vote, we can change things.”

A UI student who wished to remain anonymous said the event and the cause was important and impressive.

“I’m Hispanic, and I recognize these issues are, of course, impacting our community but also people of color, period,” she said. “We care about one another, and unfortunately, our representatives are lacking the respect we deserve and [aren’t] doing what they’re supposed to be doing, [which is] actually representing us. We’re not being heard.”

“We’re not the angry minorities. We’re patient and listeners,” Santana said. “Not that we have all the great qualities, because sometimes, we don’t. But we’re looking to start a movement.”