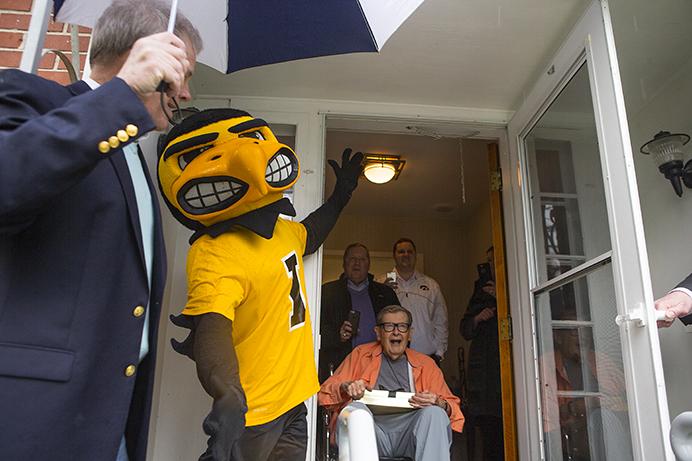 Band members play outside of former UI president and law professor Sandy Boyd surprising him on his birthday on Wednesday, March 29, 2017. (The Daily Iowan/Joseph Cress)

An afternoon drizzle came steadily down as members of the Phi Mu Alpha band sneaked into Sandy Boyd’s garage. They prepared their instruments and tried to stay as dry as possible before they performed a surprise concert for Boyd’s 90th birthday right at his front door.

Kamal Talukder, a member of the music fraternity, said it would have been difficult to get the full UI Marching Band on Boyd’s front lawn.
“We’re the condensed version to fill need for a marching band, whether it’s weddings or something like this,” he said. “It’s rainy out, but that wasn’t going to stop us from playing.”

Former Vice President of the UI Foundation Dave Dierks led them from the garage to Boyd’s front yard, and they began to play the traditional “Iowa Fight Song.”

Soon enough, the front door of Boyd’s home opened, and there he was, surprised and visibly joyous as he tapped his foot along and smiled during “Happy Birthday.”

After the performance, Boyd’s family invited the entire band inside for cupcakes.

Dierks said something special needed to be done for Boyd’s big day.

“Sandy doesn’t like surprises, so we’re always on thin ice,” he said. “Sandy is a very special man on this campus. This is our way of saying thank you, and we look forward to working with him over the next 90 years.”

Willard “Sandy” Boyd, now a law professor emeritus and former president of the Field Museum in Chicago, said he had one thing going through his mind while watching the band perform in front of him.

“Sixty-two years at the University of Iowa is what I was thinking about,” he said. “I was greatly moved. I always have said that people, not structures, make great universities, so I was thrilled to see all the people.”

Boyd’s wife, Susan Boyd, said he was surprised by the band playing at their house.

“We didn’t even mention it to each other in the family,” she said. “Once we heard about it, we were completely quiet.”

Susan Boyd said the surprise performance was an above and beyond thing for the UI community to do.

“It’s wonderful to think that there is that affection after all these years, and it certainly goes both ways,” she said.

“He has always had such a bond with the students, and it dates back to 1954, when they [Sandy and Susan] came here,” he said. “He’s always put the students first and always recognized that the university is for the students.”

Charlie Nusser, Boyd’s grandson and a UI graduate, said their family is thankful for the UI and what they’ve done for his grandfather over the years.

“It’s so humbling and speaks so much to the university,” he said. “Even when someone has retired, they are still there.”

As everybody grabbed a last cupcake on the way out the door, Boyd made sure to shake every person’s hand and thank her or him for the surprise celebration. When asked what his big plans were for turning 90, he paused for a second and then smiled.

“I’m here now, and I’ve crossed that finish line,” Boyd said. “Not that I am finished, but I’ve had a great life at the university. I even remember when Herky was born.”