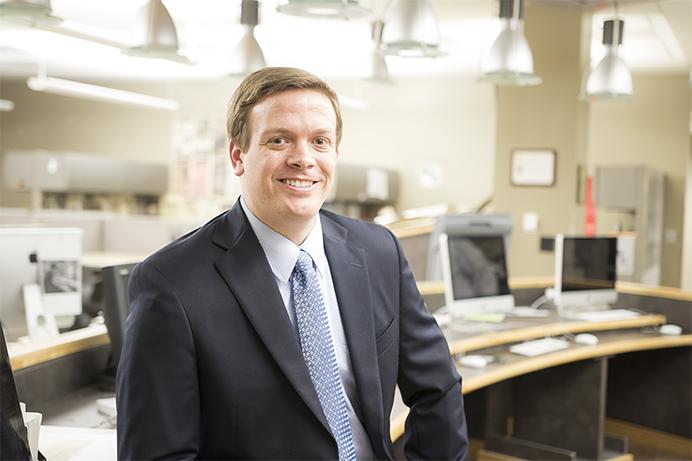 The Daily Iowan newsroom became rife with emotion as Bill Casey handed over the reins of the publisher of the 149-year-old publication to Jason Brummond on Monday.

Casey, who has served as the DI publisher since 1976, announced his retirement last year.During his time as publisher, Casey helped usher the publication into the digital age in addition to mentoring thousands of students in the University of Iowa School of Journalism and Mass Communication.

Student Publications Inc. board members and DI staffers gathered in the newsroom as Randy Evans, a SPI board member and 40-year veteran of the Des Moines Register, spoke about Casey and Brummond.

“When Bill broke the news to me last year that he was going to retire, my stomach acid started flowing like water out of a fire hose, because I knew that there were big shoes to fill there,” Evans said. “When Jason was in for his interview, I started sleeping a lot better after that night because I knew we were going to be in good hands.”

The search for a new publisher was not without its challenges, he said, but once Brummond’s name came across his desk, he felt much more at ease.

Brummond is no stranger to the DI newsroom, having served as editor-in-chief, Pregame editor, Sports editor, and a sports writer.

After finishing his undergraduate work, Brummond earned a UI master’s degree in business administration in 2014. After his time at the DI, he went on to work at UWIRE.com and Frank N. Magid Associates.

Brummond said much has changed since he graduated from the UI in 2008. One of his goals returning to the DI is to create a more “digital-first” system.

“I’ve known Bill since I was a senior in high school — he has been a mentor and a friend, and I can’t wait to step into this role,” Brummond said. “[Casey] has always been at the forefront — that’s a legacy I want to continue.”

Grace Pateras, the incoming editor-in-chief for the 2017-18 school year, said she is excited to learn from Brummond’s experience at the DI.

“He’s been in my shoes before,” she said. “There will be a fresh perspective from someone who’s been here before and also has seen us from the outside.”

Pateras said she was impressed with the ideas he presented during the interview process as well as his confidence, which she said just shows how quickly he’ll adapt.

“When we met with him last week, he told us he and Bill had similar qualities which will make for a smoother transition,” she said.

Evans said Brummond’s credentials, dedication to the organization, and eagerness to return to the Daily Iowan made him an obvious fit.

“He reminded us in his interview last week that he said 10 years ago that his goal was to be a newspaper publisher. You know, neither of us thought at the time that it would be at the Daily Iowan,” he said. “I can’t think of anybody that would be better suited to lead The Daily Iowan into the coming decades.”