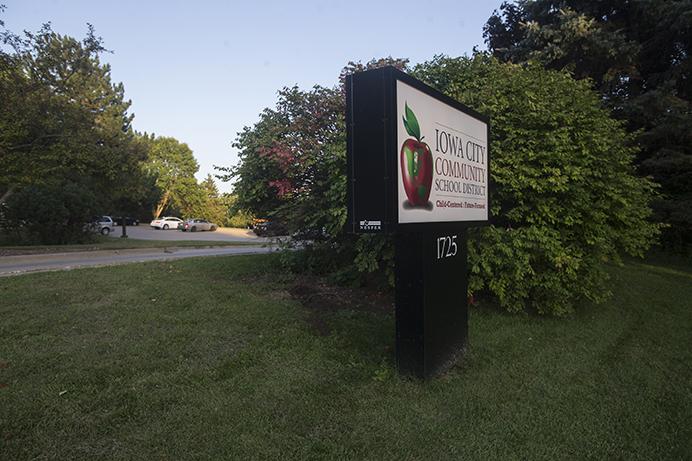 The Iowa City School District sign is seen off of North Dodge Street on Tuesday, September 6, 2016.

Citizens of Iowa City have mixed opinions about the School District’s decision to change the start and end times.

School Board member Chris Liebig said the change was made because the School District runs the same buses to pick up both elementary and high-school students. For this to work, Liebig said, there must be a certain time gap between the schools’ start times. Another problem that led to this change was the complaints they received about the longer school hours for kids, he said.

“We were getting complaints about it being a very long day for very young kids who were in school until almost 4 under the system before we made the change,” he said.

Liebig said it would be nice for elementary and secondary schools to start at 8:30 a.m., but the district was constrained because of financial issues, and an hour gap was needed between both start times.

“We had to make a decision about starting our elementary day early and starting our secondary day late, or are we going to do it the other way around?” he said.

The pros of having older kids start after the younger kids outweigh the cons, Liebig said.

City High Principal John Bacon said his reaction to the new start times was neutral. He said he believes it is great for kids to get a little more sleep and teachers to have more flexibility for teacher collaboration.

“On the positive side, there’s lot of research to support [the notion that] students getting a little extra sleep can be a good thing for [them],” he said. “And so, our kids usually have a little more time in the morning now, and I think that’s very positive.”

However, he is against kids missing more school time. Bacon noted the biggest issue the change imposes is students leaving early for athletic events.

“If there is a kid that has to leave for a road game, they are missing more class time then they did in the past, so that’s the biggest challenge,” he said.

Natoshia Askelson, aUI assistant professor of community and behavioral health, said the reason high-school students stay up late is because of changes in hormones and circadian rhythm.

“In order for them to get the full nine hours that they need, they of course need to sleep later in the morning,” she said.

Sleep affects a lot of human aspects, she said, especially appetite. Without breakfast for their minds to work, it will lead to lower scores and more trips to the nurse’s office.

“The kids that say ‘I would rather sleep another 20 minutes, then worry about breakfast,’ means they’re not getting that fuel their body needs, their minds need,” she said. “So then, not only are they sleep deprived, but they’re not having the energy they need for their minds to work.”