Families make a smooth transition to the new Children’s Hospital. 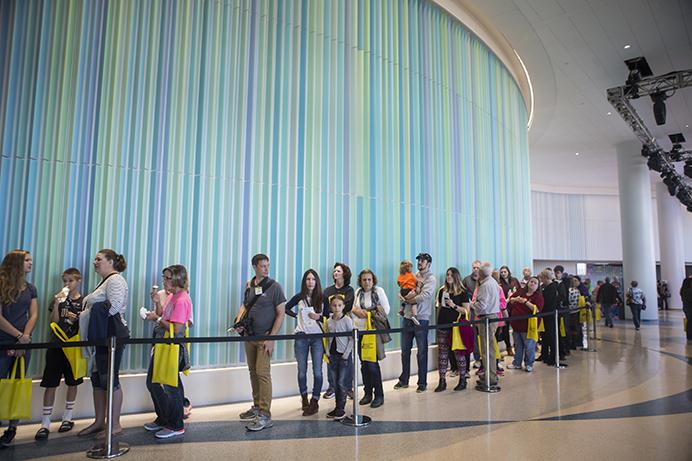 Families stand in line to tour upper floors of the University of Iowa Stead Family Children's Hospital on Saturday, November 5, 2016. The hospital hosted a weekend open house for the new $364 million building. (The Daily Iowan/Olivia Sun)

The University of Iowa Stead Family Children’s Hospital moved dozens of families from the old children’s hospital with ease on Feb. 25.

Lilly Timmerman, a pediatric patient at the children’s hospital, was admitted for acute myeloid leukemia (AML) in December 2016. When the new Children’s Hospital opened last month, she was part of one of the families that made the move.
“It really wasn’t crazy,” said Maria Timmerman, Lilly’s mother. “When we first checked in [the old hospital], everyone had talked about them moving the date back.”

As for the staff, a lot of meetings were held in preparation of the opening date, but the move went as expected, said Julie Landsteiner, a nursing manager at the Children’s Hospital.

“[For] the families, it was kind of a long day because they were all ready to move, of course, in the morning, and we probably started moving at about 4 p.m.,” she said. “Kids can be a little impatient, but I think once they got over there, they were just happy as can be.”

When the hospital started the move, the Timmerman family was ready. Especially with the help of the volunteers.

“They brought all of our things over,” Timmerman said. “All we did was show up with [Lilly] and her bed. So that was nice.”

Compared with the old hospital, the new hospital’s features allow families such as the Timmermans to have everything in one place.

With the playrooms that overlook Kinnick Stadium, and the room features that allow the children to play games, watch TV, and more, the Timmerman family enjoy the hospital’s new features.

“This is kind of our home away from home,” she said.

Another new feature in the hospital is the monitored air-pressure levels throughout the hospital and more on the 11th floor allowing patients to be on the entire floor.

As for the Carlson family, their move from the old to new hospital went just as smoothly. At the old hospital, Mary-Grace Carlson and her two premature twin boys, Richmond and Cunningham, stayed in bay 2 of the Neonatal ICU.

“Switching over here was like a graduation for us,” Carlson said. “So we were pretty excited not because the facility was new but because it meant our kids didn’t need as intense of intensive care.”

Since Richmond and Cunningham have been here, the facility has been nice and pristine, she said.

“The view outside the windows is definitely a plus,” Carlson said. “That is one advantage that we like more even than the fact the room is bigger is just that we can see outside and there is light in our room.”

During Richmond and Cunningham’s stay at the old hospital, there wasn’t natural sunlight like the new hospital has, she said.

The Carlsons were transferred to the new hospital a week after opening, but Richmond and Cunningham are the first patients to stay in Room 614. On Wednesday, Richmond was released from the hospital, but Cunningham will stay.

“We will move to a single room, but the hospital is really gracious in allowing a bassinet and allowing us to all stay together until Cunningham is released,” Carlson said.

Having single rooms is a new feature at the Children’s Hospital, Landsteiner said. In the old unit, there were doubles, which was very hard on patients and their families.

“The other big thing I noticed [is that] our old unit was set up as such that it was really noisy, and one thing we have noticed so far in the new hospital is that I have never heard it noisy,” Landsteiner said.