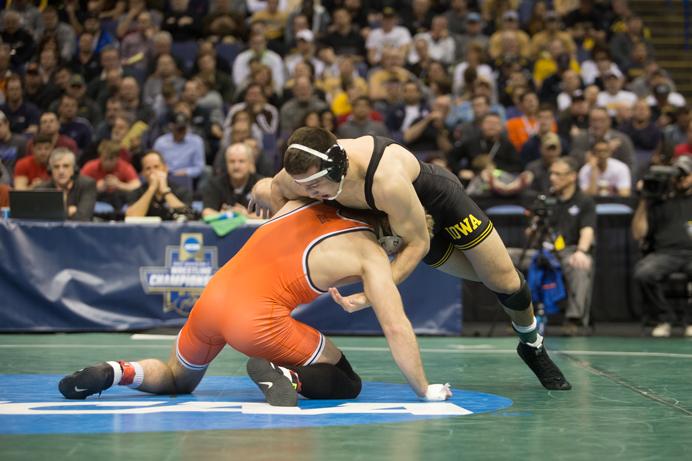 The conclusion of the season brought a triple whammy for the Iowa wrestling team. Nine guys in national champion Penn State’s lineup will return next year, including five NCAA champions. Every starting wrestler for Ohio State is set to come back.
Iowa, on the other hand, is losing five seniors who collectively have earned a national title, four Big Ten champions, and 10 All-American Awards.

This leaves a lot of questions about Iowa’s future.

Although half of Iowa’s lineup will graduate in a couple of months, there is a bright side for the Hawkeyes. Four wrestlers qualified for the national tournament and got a taste of a higher level of competition, including three-time All-American Brandon Sorensen, and redshirt freshman Michael Kemerer, who took third last weekend.

The experience is invaluable and will help when working with the fresh crop of faces that will appear in Iowa’s lineup next season.

“I’ll be there, Kemerer will come back, we had a couple guys here at the tournament that got beat out that have experience down here now,” Sorensen said after taking third place at NCAAs. “Leadership doesn’t have to be senior leadership. It can be freshman leadership, it can be any age, it doesn’t matter. There’s leadership all over. It’s doing the right things, moving the team along in the right direction.”

Underclassmen leadership will be huge for the Hawkeyes moving forward because Sorensen is one of just six sophomores or juniors on the roster right now who have any dual-meet experience whatsoever. Sorensen and sophomore Sam Stoll are the only ones who have held a permanent starting spot in the lineup. However, Stoll missed almost all of this season because of injury.

Sorensen said Kemerer has done well in a leadership role this season not only for the younger group that he is a part of, but for the team as a whole.

The 157-pounder sees next season as an opportunity to teach what he’s learned from the graduating seniors to the incoming batch of wrestlers.

“I’m going to miss those guys a lot. I’ve learned a lot from those guys,” Kemerer said. “It’ll be a young team next year, so I have to take the stuff that they’ve taught me and teach it to some of our younger guys. Getting back to winning starts with our young guys right away, getting them with that right mentality and turning things around.”

Spencer Lee, a three-time Pennsylvania state champion and the nation’s No. 1 pound-for-pound wrestler, will also join the Hawkeyes next season. He posted a record of 144-1 during his high-school career, with the lone loss coming March 12 in the state finals. He is a two-time Junior World champion and a Cadet World champion.

Iowa’s ability to land such highly touted prospects for the upcoming seasons not only has to do with the nature of the program but also with the seniors leaving this year, Iowa head coach Tom Brands said. Their dedication and accountability have attracted others to the program, too.