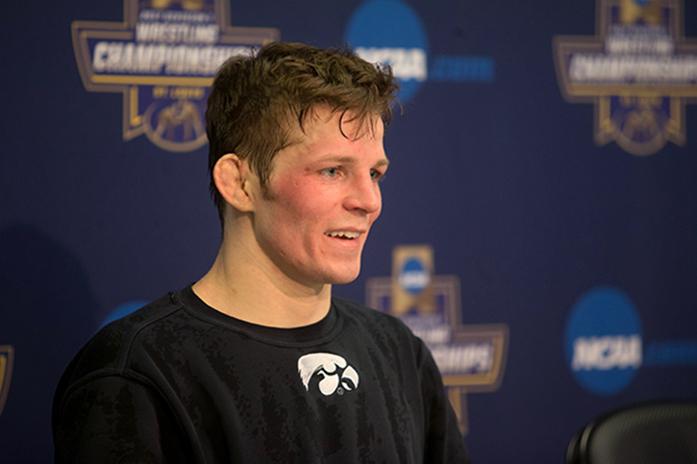 Iowa’s Cory Clark smiles as he talks to the press during the 2017 NCAA Division I Wrestling Championships in the Scottrade Center in St. Louis, Missouri on Saturday, March 18, 2017. Day 3 brought about many surprises and a great wave of new champions. Iowa came in fourth overall with a team score of 97.(The Daily Iowan/Anthony Vazquez)

Torn ligaments in his wrist and a blown out shoulder socket couldn’t stop Iowa wrestler Cory Clark from doing what he always knew he could — win a national title.
On the night of March 18, Clark had one last chance to accomplish the feat he could not in two other trips to the NCAA Finals, and he made the most of it. Squaring off against former teammate turned No. 2 seeded South Dakota State 133-pounder Seth Gross, Iowa’s senior won on the big stage in a 4-3 decision.

Clark went down right away in the first after a Gross takedown but tied the score with two escapes, one on a takedown and one from starting down in the second period. Clark could not erase the riding time Gross had built up when he started on top in the third, and a Gross escape put the score at 3-2, not including the point then for riding time.

Not taking many shots in the first period, Clark knew he had to be calculated with his attempts in order to score on Gross.

“My shots were there, but I wasn’t going to — with my shoulder dinged up I gotta be crisp. I can’t be diving and hoping to get a leg,” Clark said. “I finally, late in the match, I had to go to it. I went to it. And right when I got in on the leg, Terry [Brands] said, ‘You’ve been here your whole life, you’re good.’ ”

Clark rode Gross out for the rest of the third period to earn best in the nation.

While he was already going out in style with a championship finally under his belt, Clark added a little more flair to the celebration by throwing associate head coach Terry Brands over his shoulder and slamming him to the mat before exiting the big stage.

Brands said it was Clark’s idea, but the now-four-time All-American’s side of the story seemed a bit more believable.

Since January, it has been obvious there was something wrong with Clark. He sat out the month of December, and when he returned, he donned a large black brace over his left shoulder and taped wrist on the same side.

Being the stoic man he is, the short-lived absence and the new gear were the only evidence that something had happened. Anytime either he or Iowa head coach Tom Brands were asked, it was the same answer: Clark was ready to go when he needed to go.

While that may not have always been the case physically, it was mentally. Though he was admittedly hurting and unsure about his future, Tom Brands was not. He knew what his wrestler could accomplish and talked some sense back into him following the injuries.

“When I was at my all-time low, Tom pulled me in his office talking to me, ‘What, you think your season is over? Why are you out there pouting?’ Not being mean. He was just being realistic,” Clark said. “This is my senior year. This is what I gotta deal with. I’m here. It’s been done. No magic wand. No surgery going to happen … that was kind of the point where I just really had to buckle down and get serious.”

Clark has always been a thinker. Teammate and three-time All-American Thomas Gilman said after he lost in the Big Ten championship match earlier this season, Clark spent hours on end watching the video on his phone, figuring out what he needed to fix and talking to teammates and coaches asking if they saw anything he didn’t.

His mind has allowed him to be patient, an attribute necessary in dealing with his injuries.

Terry Brands said Clark’s state of mind was the reason he accomplished what he did over the weekend.

“I think he was dialed in, he was relaxed,” Brands said. “You could tell by his demeanor all weekend; he was super-relaxed, and he was ready to go. He wasn’t racy and didn’t force things. The couple of times that he did force them, he got in trouble, but then he solved it. That shows a lot of mat savvy, it shows a lot of poise, it shows a lot of focus. That clarity in his mind, that was the difference in the weekend for him.”

Clark became the first Iowa wrestler since Tony Ramos to win a national title. That was in 2014, when Ramos handled the 133 duties for the Hawkeyes. After Clark’s press conference, Ramos, wearing North Carolina attire, met Clark in the tunnel, where the two embraced.

Tom Brands said the end of the drought needed to happen, and he’s happy it did for Clark, his family, the team, and the school.

Seeing him at his lowest immediately after the injuries, the head coach knew the guts it took for Clark to not only compete but also to finish the season at the highest level possible.

“All I said to him when I met him on the edge of the mat there was, ‘You’re a tough son-of-a-gun,’ and that’s what he was,” Brands said. “He’s always been like that.”