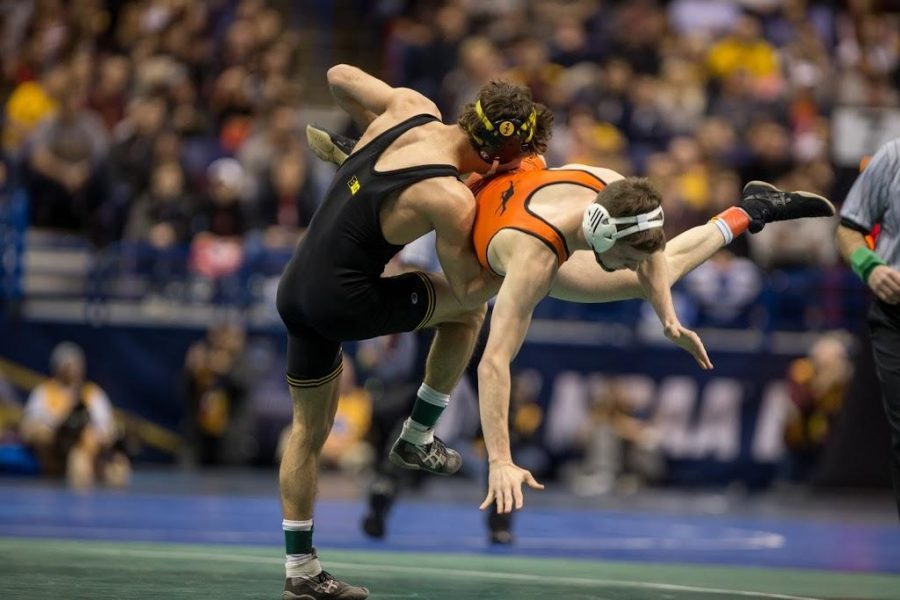 Iowa’s Thomas Gilman lifts Campbell's Nathan Kraisser during the 2017 NCAA Division I Wrestling Championships in the Scottrade Center in St. Louis, Missouri on Thursday, March 16, 2017. 330 college wrestlers from around the country compete to named the national champion in their weight class. (The Daily Iowan/Anthony Vazquez)

ST. LOUIS – March 17 was just about as bad as it could’ve been for Iowa, but March 18 was a different story.

After three of Iowa’s four semifinalists got dropped into the consolation bracket, they all fought their way through their respective paths in the medal rounds to compete for third place.

On March 17, top seed Thomas Gilman was upset by Lehigh’s Darian Cruz. Though he was disappointed, the senior battled his way back by winning two matches the following morning and capping off his illustrious career as a Hawkeye with a third-place finish.

After his loss shook the Scottrade Center and fans around the country, Gilman has yet to fully consider what his defeat means.

“To be honest, I haven’t processed it yet. I came here on a mission, and the mission was to be a national champ,” he said. “But you know what? Sometimes you get blown off course, you get dropped off somewhere else. You’ve got to fight your way back. “I never aborted the mission; the mission just kind of changed a little bit … After this, I’ll take some time, and be emotional, and refocus, and it’ll set in that I’ll never be an NCAA champion, and I’m sorry for my team and my university.”

Gilman has said all season that his goal was to win a national championship, and even though that didn’t happen, he still sees his career as a successful one.

“From when I started until now, I’ve gotten a lot better at wrestling, but more than that, I’ve become a better person,” he said. “I’m starting to become a man, and the Iowa program, the coaches, the family around here has helped me become that man, so yes, it has been a success.”

In addition to Gilman, another senior’s career ended March 18. In the bronze medal match at 184 pounds, Sammy Brooks was pinned by Nebraska’s TJ Dudley.

Brooks’ career didn’t end the way he would have liked, but he still accomplished a lot as a two-time Big Ten champion and two-time All-American, not to mention earning the rights to the best mullet in college wrestling.

With Brooks and Gilman gone, as well as the other seniors, the future is still bright for Iowa wrestling, and it’s highlighted by 149-pounder Brandon Sorensen and 157-pounder Michael Kemerer.

After also losing in the semifinals, Sorensen won a consolation semifinals match before beating Bo Jordan for the second time in about 24 hours to take home a bronze medal of his own.

With a highly touted recruiting class coming in that includes the No. 1 recruit in Spencer Lee, Sorensen is already looking for big things from them. Given the talent that’s leaving, that is a tall task.

“It’s gonna suck with those guys leaving, but it happens every year,” Sorensen said. “We have a good group leave, and hopefully, some freshmen can come in and replace them.”

Kemerer, on the other hand, was eliminated from title contention prior to the semifinals. He was upset in the quarterfinals by Cornell’s Dylan Palacio.

Since then, he won four matches in the consolation bracket, eventually taking down Oklahoma State’s Joseph Smith in a sudden-victory period to give himself a third-place finish.

A redshirt freshman, Kemerer placed the highest of any Hawkeye freshman since Matt McDonough in 2010, and the lessons he’s learned can be applied to the Hawkeyes next season.

“I think I did a good job of coming prepared every day and staying level-headed,” Kemerer said. “To climb, though, [you] can’t be complacent. Just because you’re winning doesn’t mean that there’s not someone else out there.”