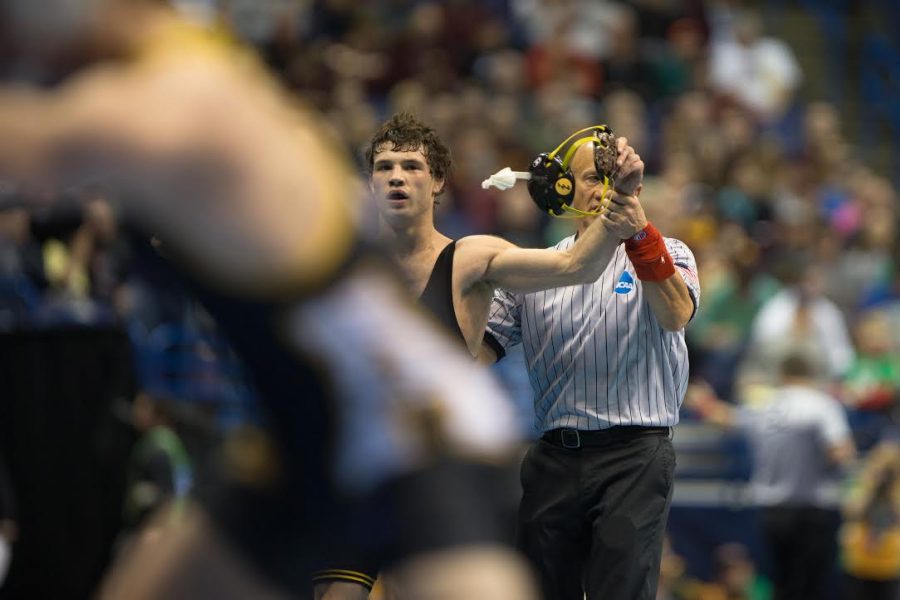 Iowa's Thomas Gilman has his hand raised and moves on to the semifinals during the 2017 NCAA Division I Wrestling Championships in the Scottrade Center in St. Louis, Missouri on Friday, March 17, 2017. Day two of the National Championships shrinks the number of competitors down to the final competition for the championship matches on Saturday. (The Daily Iowan/Anthony Vazquez)

Since the start of the day at 10 a.m., the Hawkeyes have seen four of their own advance to the semifinals with a shot at the elusive national title they’ve been chasing.

Team-wise, Penn State started running away with its lead. After Session III, Iowa is third in the team race with 58 points, behind the Nittany Lions (74) and Ohio State (59).

This is what has happened since last night’s session.

125: Thomas Gilman continued on his path of destruction, by scoring all-important bonus points again, winning by fall over Oklahoma State’s Nicholas Piccininni. With that win, Gilman has scored bonus points in all three of his matches. When he gets out on the mat for the semifinals later tonight, he will have Lehigh’s Darian Cruz across from him, trying to accomplish what no one else has done against him all season: win.

133: With a 6-4 decision over Stevan Micic from Michigan, senior Cory Clark became a four-time All-American. With that achievement, Clark is now closer to doing something he’s never done before; win a national championship. In the semifinals, Clark will look for revenge in a rematch with Ohio State’s Nathan Tomasello, whom he lost to at the buzzer in the Big Ten Championship finals.

141: Senior Topher Carton won two matches on Thursday, but wasn’t quite as fortunate on Friday. After qualifying for the NCAA Championships in his first full year as a starter, Carton’s career came to a close, as he was defeated by Ohio State’s Luke Pletcher in a 9-6 decision.

149: After placing second at last year’s NCAA Championships, Sorensen is trying to one-up himself from last year, and he keeps getting closer. Sorensen avenged his loss to Micah Jordan at the Big Ten Championships with a win of his own to advance to the semifinals. In the semifinals, he will go up against 1-seed Zain Retherford. He is 0-3 against Retherford in his career, but Sorensen will look to turn his fortunes around tonight.

157: The biggest upset of the day for Iowa came at 157 pounds, but it was not good news for the Hawkeyes. In his first match of the day, redshirt freshman Michael Kemerer was pinned in shocking fashion by Dylan Palacio of Cornell. The loss was just Kemerer’s third of the season, with the other two both coming against 1-seed Jason Nolf. After the disappointing defeat, Kemerer is attempting to continue his path to All-American honors against Penn’s May Bethea.

165: Since winning a match in wrestlebacks on Thursday night, Gunther used his momentum to beat Branson Ashworth at the beginning of Friday’s session. However, that momentum wouldn’t last long, as Gunther was outperformed by fellow in-state wrestler Bryce Steiert from Northern Iowa. The loss eliminated Gunther from the tournament.

174: Following a big win on Friday night over Lehigh’s 6-seed Ryan Preisch, Alex Meyer narrowly lost to Bo Jordan, which sent the senior to the consolation bracket. An All-American last year, Meyer will look to get back to that level, as he takes on Oklahoma State’s Kyle Crutchmer.

184: Sammy Brooks was in trouble. Down 2-1 in the third period to Emery Parker of Illinois, with riding time on Parker’s side, Brooks used some magic. He went from defense to offense, flipped Parker, and got the pin. In the semifinals, Brooks will face familiar foe Bo Nickal, who pinned Brooks in just 38 seconds earlier this season.

197: One of the biggest surprises of the tournament for Iowa, Cash Wilcke has been on a roll these past couple of days. Since joining the field due to an injury to a competitor, Wilcke has gone 3-1 in the tournament, with his latest win coming in a crazy match that took two sudden victory periods to determine a winner. Needing one more win to gain All-American status, he will battle 10-seed Kevin Beazley.