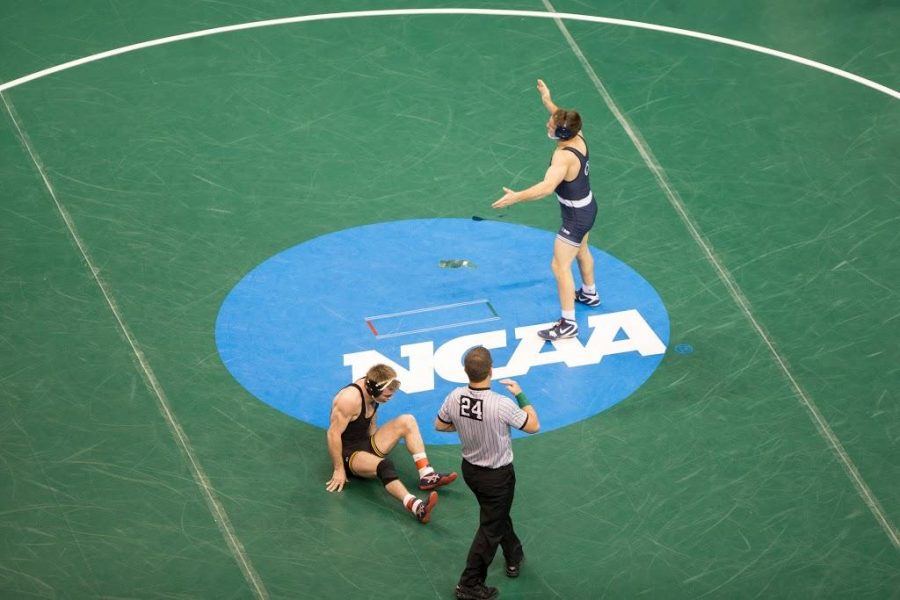 Iowa's Brandon Sorensen loses by fall to Penn State's Zain Retherford during the 2017 NCAA Division I Wrestling Championships in the Scottrade Center in St. Louis, Missouri on Friday, March 17, 2017. Day two of the National Championships shrinks the number of competitors down to the final competition for the Championship match on Saturday. (The Daily Iowan/Anthony Vazquez)

While there was one bright spot in the semifinals for Iowa, there were many more disappointments.

Cory Clark was the only Hawkeye to advance to the finals, leaving Thomas Gilman, Brandon Sorensen, and Sammy Brooks to fall to the consolation bracket.

Gilman’s loss was his first of the season; Lehigh’s Darian Cruz got the best of him in a sudden-victory period. With just under 10 seconds left in the third period, the score was tied. Then Cruz got in for a takedown, but Gilman escaped and got a point for riding time to send it into overtime.

Not long after, though, Cruz took Gilman down to dismantle Gilman’s hopes of an NCAA title.

“He’s strong, I would say, and he waits for you to make a bad move, and then he counters and scores,” Cruz said. “I tied up with him, as strong as I could, I stayed patient and chose my shot selection.”

Gilman’s loss was a big shot to Iowa’s chances at a team title, but there were still three other semifinalists with a chance to qualify.

However, Sorensen couldn’t live up to the task. In the first period, Penn State’s Zain Retherford pinned him to move Sorensen’s career record against the Nittany Lion to 0-4.

Like Sorensen, Brooks wasn’t close to a win at 184 pounds, either. After getting pinned by opponent Bo Nickal in 38 seconds earlier in the season, Brooks couldn’t improve, losing by fall in 1:02 this time around.

While all of those Iowa grapplers are still alive in the consolation bracket, Cory Clark is the only Hawkeye still standing with a chance to take home a championship.

Clark avenged his loss to Ohio State’s Nathan Tomasello in the Big Ten Championship finals with a win of his own to send him to the NCAA finals, where he will meet South Dakota State lightweight and former Hawkeye Seth Gross.

“Tough match, good, hard-fought match,” Clark said. “Wasn’t pretty in my favor, but I got the W.”

Along with Clark and Company, there is one other Hawkeye still alive in the wrestlebacks, 157-pounder Michael Kemerer.

Kemerer was upset early March 17 by Dylan Palacio, but he has battled through the consolation bracket to earn All-American honors and a shot at third place.

He will face a familiar opponent in Nebraska’s Tyler Berger on March 18, who he has beaten all three times they’ve competed this season.

Unfortunately for Iowa, two seniors have finished their wrestling careers, as Topher Carton and Alex Meyer were eliminated from the tournament after their national qualifying seasons.

Even though the Hawkeyes have fallen deeper in the team standings, head coach Tom Brands said the March 18 matches still matter more than some might think.

“We addressed [the importance] at the end of last year. We addressed it at the beginning of this year,” Brands said. “This is something where it’s been communicated that that third day does matter.”