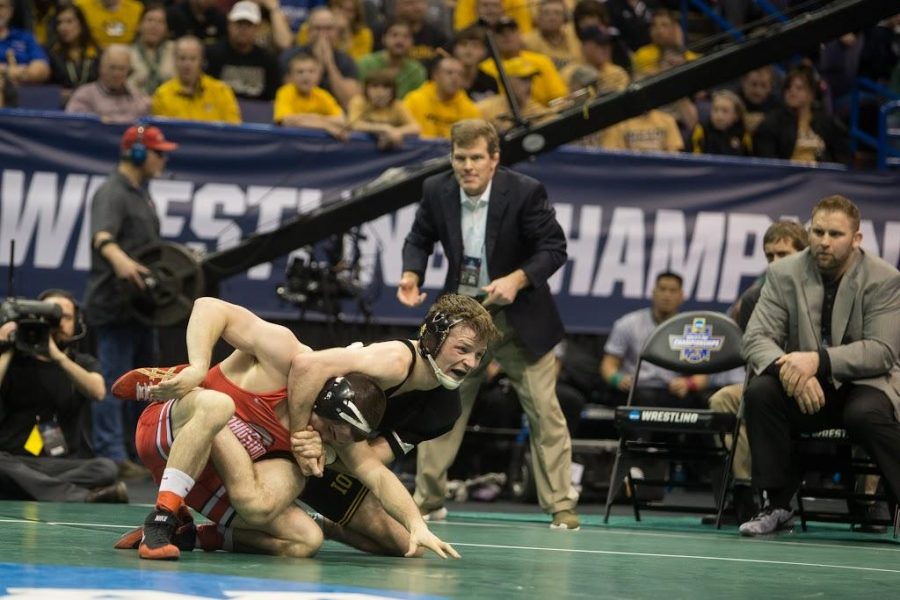 Iowa's Cory Clark holds onto Ohio State's Nathan Tomasello during the 2017 NCAA Division I Wrestling Championships in the Scottrade Center in St. Louis, Missouri on Friday, March 17, 2017. Day two of the National Championships shrinks the number of competitors down to the final competition for the Championship match on Saturday. (The Daily Iowan/Anthony Vazquez)

Cory Clark is in familiar territory.

For the third time in the past three years, Iowa’s 133-pounder will make the trip to the national championship match. The evening of March 18 will be Clark’s last chance at the national title that has eluded him his entire career.

Twice Clark has lost in the finals match – in 2015 to No. 13 seed Cody Brewer, the second time last year to Cornell’s Nashon Garrett.

It would be easy for Clark to hold a chip on his shoulder after going 0-2 in the biggest matches of his life to date, but Iowa head coach Tom Brands said that is not the case.

“He’s very unassuming. He’s going to go out and take care of business,” Brands said. “This is not a grudge thing, or anything. This is about the national championship match at 133 pounds.”

After missing a good portion of the season for precautionary reasons involving his wrist and shoulder in particular, the three-time All-American’s ascent through the tournament may be surprising to some.

But not to him.

Clark has said that one of his main goals is to not show any hurt or emotion, something he has been rather good at considering the circumstances. As a senior, he knows what is on the line. The amount and intensity of the pain no longer matters, and he is not willing to talk about it, either.

“To be honest, we’re in the national finals. It doesn’t matter if you cut my arm off,” Clark said after his semifinal win. “Once the tournament is over, I’ll be glad to sit down and tell you what hurts. Not to be an ass, but it’s kind of how I feel.”

Clark’s last task of his career as a Hawkeye will come in the form of Seth Gross, a South Dakota State wrestler who transferred from Iowa two years ago.

South Dakota State head coach Chris Bono gave Gross a second chance in a situation in which not many others would.

“Looking back that day, I never thought I would be wrestling in the NCAA Finals … I thought my wrestling career was over,” Gross said. “Ties with Iowa, I wouldn’t say it’s bad blood anymore. I made the mistakes, not them, and I don’t have a right to be mad at them, but it gives me extra fire knowing it’s a guy that I was supposed to be on the team with.”

It does seem as though any bad blood that may have existed in the past has dissipated. Brands does not care to talk about the situation, and Clark comes off as though he is indifferent toward the former Hawkeye.

Both say it’s another match.

It’s been awhile since either have talked to Gross, so neither really know what has been going on with the sophomore. Clark only knows what he was like when he was at Iowa, but he is not going to let that play into how he handles the match, because two years is a long time.

“Two years has gone by, and I think he’s matured, and I think he’s formed himself into what he wants to be. Back then he was a redshirt. He wasn’t really wrestling for a purpose or whatever,” Clark said. “I’m not going to sit here and say he’s a screw-off or he doesn’t have the frame of mind I have because maybe he didn’t two years ago, but I’m not going to take him lightly.

“I know he’s aware and wants to win this national championship, and I know he would love to stick it up my you know what.”