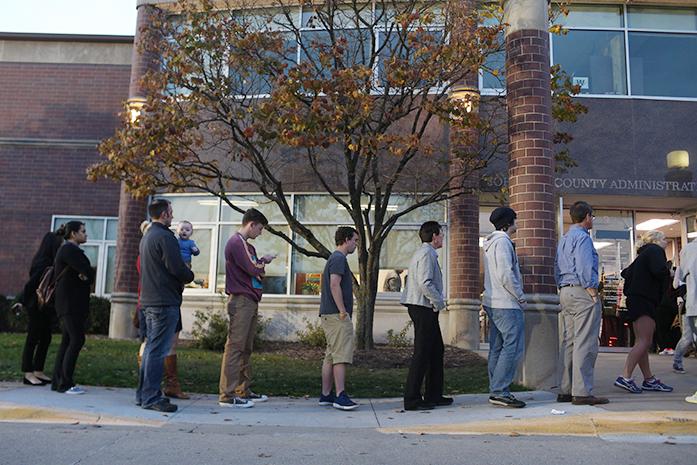 Voters wait in line outside of the Johnson County Administrative Building on Monday, Nov. 7, 2016 in Iowa City. Monday was the last day of early voting before Tuesday's General Election for the 2016 presidential nomination. (File Photo/The Daily Iowan)

In a poll conducted by the Des Moines Register, 69 percent of respondents reported being in favor of Iowan Secretary of State Paul Pate’s voter-ID legislation.

The legislation establishes the use of electronic poll books and a voter-ID system with signature verification, absentee-ballot verification, and post-election audits.

“We are modernizing our elections,” Pate said. “That’s what this bill is about. Bringing the technology up to speed, streamlining the system and yes that will help secure integrity and prevent voting fraud but more importantly, human error.”

However, some organizations, including University of Iowa Student Government, are worried about the part of this bill that requires a new form of voter identification.

“Upgrades to technology are valuable and important and could potentially help, like they’re saying, to modernize the voting system in the state,” UISG President Rachel Zuckerman said. “But that doesn’t have to be done at the expense of the participation of college students, minorities, and other people.”

Rep. Ken Rizer, R-Cedar Rapids,who was involved in the crafting of the voter-ID bill and managed it to the floor of the Iowa House, said that majority of Iowans’ support was because of the importance of voting.

“I think Iowans just understand that the vote is such an important thing, it is a critical constitutional right that has to be protected,” he said. “It’s a conditional constitutional right, reserved for U.S. citizens, Iowa residents over 18, non-felons, or felons who’ve had their voting rights restored.”

“Iowans are wanting more confidence in their elections process,” he said. “The voter-ID components are one of those things that make them more sure their votes are being counted.”

In response to concerns that some people will be limited from voting, Pate said there will be other options.

“Nobody will be turned away from the polling place if they are eligible; they’ll have an opportunity to vote,” Pate said. “If [voters] show up the without IDs, government IDs, or their voter registration cards, we will give them some options how they can continue to vote, that being put on a tester or given a provisional ballot.”

However, Zuckerman said, this is not enough.

“A provisional ballot is not the same as a regular ballot, and they should not try to sell it as such,” she said. “It does not carry the same weight in the voting process.”

Though Pate said the goal of the bill is to modernize the process and ensure Iowans know their votes count, Rizer said that voter fraud could potentially be a concern.

“I agree that we don’t have widespread election misconduct in the state of Iowa, but it does occur,” he said. “There might have been some discrepancies or problems in the absentee voting, but there was no way to know because we didn’t check. The system we have essentially has no checks at all.”

Zuckerman said voter fraud should not be a concern, and people in the power have an obligation to say so. The majority of Iowans supporting this bill could be a result from this lack of clarification.

“These are the people we should be able to trust. They should be talking about the fact that voter fraud is not an issue,” Zuckerman said. “They keep citing this public-opinion data as a reason to do it, but they’re not crediting themselves with being the reason the public opinion is what it is.”

Pate said he is disappointed that people are trying to politicize the bill and make it a polarized topic.

“There are those who would prefer us to let everyone just walk in and vote. This is too important to do it that way,” he said. “Take politics out of this, and look at it from a technology standpoint and give Iowans what they expect, which is more both participation and integrity.”

“The current bill is too black and white,” she said. “There is an in-between that the bill is missing.”