Academics discussed the significance of investing in higher education despite the challenges facing the nation’s public universities. 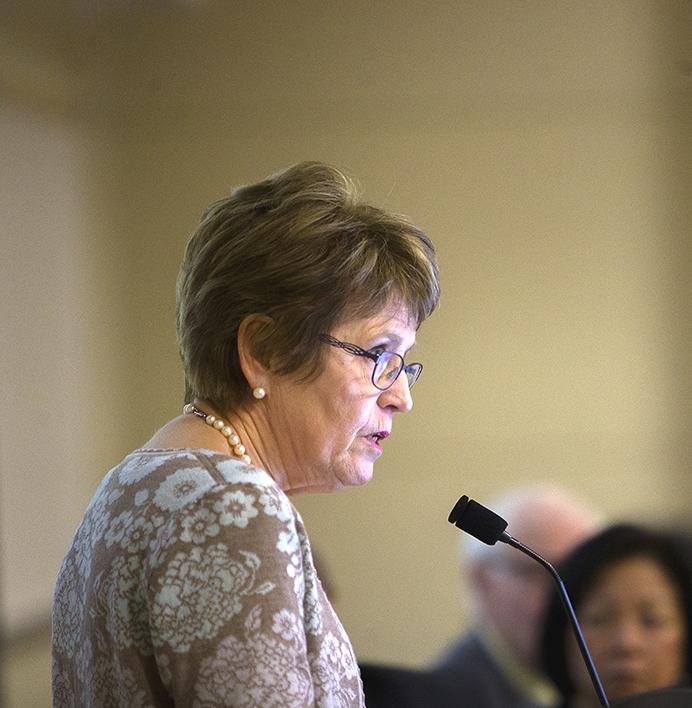 Harreld was joined by Mary Sue Coleman, former UI president and current president of the Association of American Universities; Jim Leach, former U.S. representative and interim director of the UI Museum of Art; and Phyllis Wise, a former University of Illinois-Urbana/Champaign chancellor.

Particularly this year following the Iowa Legislature’s decision to reduce funding to the UI by $9.2 million, the UI community has become quite familiar with the problem of state disinvestment in higher education.

“There are more students who go to public universities who come from families where there is financial need,” she said. “The wealthier families can afford to send their kids to [private universities]. We are getting large numbers of students who also are first generation … and whose parents are still not financially well off.”

People send their kids to institutions of higher education, because the places provide students with an opportunity to experience new things that prepare them for life and allow them to become better citizens, Harreld said.

“It feels like to me that we now view public higher education as an expense to be minimized in the state, something to be squeezed because we don’t have the resources,” he said. “… When are we going to go back to investing in the future again? It seems to me these are amazingly huge opportunities for economic development.”

While the state’s disinvestment in higher education funding has forced the UI to re-evaluate its financial-aid offerings, such as the Summer Hawk grant and legacy scholarships, among other things, Harreld said the university could probably stand to not receive additional state funding.

“I’m not so sure from our state we need more money as much as predictability,” he said.

Coleman, however, said the state has an obligation to provide some base level of support, though she agreed with Harreld about the need to be better entrepreneurs.

“I worry about saying, ‘Well, you can walk away from that,’ because those resources are golden, because they are unrestricted funds,” she said.

Forming some sort of matching program among the state Legislature, federal government, and private philanthropy might help universities, Coleman said.

The UI Foundation announced last month its “For Iowa. Forever More.” fundraising campaign raised nearly $2 billion. Since the announcement, coupled with the financial obstacles brought on by the funding cuts, there has been some pushback from the public on the way those donor dollars are spent.

“Most public research universities have dramatically increased their philanthropic efforts, and Iowa is very fortunate to have a long history with the University of Iowa Foundation raising private support,” she said. “… Even though the University of Iowa Foundation has a nice endowment, and it does have a nice endowment, its endowment spending per student because the scale of the institution is tiny, and it cannot currently replace what the state does.”