The monthly ‘WordCanvass’ hosted a discussion on immigration Wednesday evening in the Voxman Music Building. 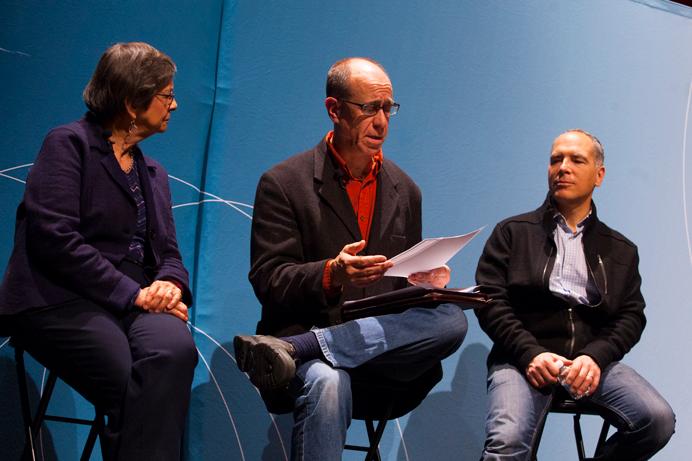 Although immigration is among the issues at the heart of the current political discourse, it has been ingrained in Iowan culture since its earliest days.

A series of panels hosted by “WorldCanvass,” produced by the University of Iowa International Programs, discussed immigration on Wednesday evening in the Voxman Music Building.

The three-part series began with German Iowa and the Global Midwest, an October 2016 symposium held in the UI Obermann Center for Advanced Studies.
The symposium explored Iowa’s “multicultural” heritage.

H.G. Penny, a UI professor of history, said he wanted to think about ways to connect people nationally and internationally.

“Students just got us more excited about it,” he said. “[Students were] coming from all kinds of places.”

For Penny, it is fascinating that much of Iowa’s history is written in German.

“They [were] very much global citizens as well as citizens of Iowa,” he said.

The panel noted the impact of Iowan breweries and their efect on local economies — this affected the Iowan Germans in around the time of Prohibition.

In addition to Iowa’s breweries, its architecture was also affected by German immigrants, said Elizabeth Heineman, a UI professor of history.

“A lot of architecture, not all German, around the state has to do with building skills that immigrants brought with them,” she said.

German immigrants were soon joined by other immigrant groups.

Heineman noted prior restrictions placed on immigrants from certain ethnic groups; these restrictions were lifted, she said, and immigration increased elsewhere.

When discussing the fall symposium, Glenn Ehrstine, a UI associate professor of German, said he was interested in “a whole world out there.”

“We wanted to tell the story that hadn’t been told yet,” he said about the symposium. “These stories have been handed down from generation to generation.”

From the first Iowan census in 1850, Ehrstine said, to about 1980, German immigrants were the largest immigrant group in Iowa.

In fact, he noted that many rural comminutes and even some cities could conduct daily life in German.

The panel then discussed bilingualism and hyphenated identities.

She said national identity is about connection.

“[Language is] always connected with society,” she said. “[It’s about] what type of phenomenon you serve.”

Ehrstine said there was a great diversity in national identity.

“Townships had different ethnic populations,” he said. “[Townships] welcomed them as speakers of foreign language.”

Penny noted that differences in ethnic populations were not always welcomed.

Around the time of World War I, he said, there was a campaign against the “hyphen.” In this sense, the label “German-American” became a debate.

The panel closed with speaking on immigration and refugee movements in times of crisis.

Ronald McMullen, a UI Ambassador in Residence and a lecturer in the Political Science Department, said 2002 was the low point for U.S. refugee admissions.

The United States, during the past fiscal year, accepted approximately 37,000 refugees; Iowa accepted around 392.

“[Immigrants] see the United States as the land of opportunity,” he said. “[But during] the whole of 2017, [I believe it] will be a lower number than that.”

Boumedien Kasha, an assistant executive director for the Refugee and Immigrant Association, has been in the United States since 2003, when he arrived from the Democratic Republic of the Congo.

Kasha said his mission is to provide support for all immigrants from the world.

He noted that many of the people he works with do not speak English, so entering the United States, for them, is a challenge. Kasha, however, said he continues to assure immigrants and refugees despite the problems.

“Our vision is to participate in a community that helps immigrants and refugees become independent in the communities,” he said.