Gilman takes the spotlight ahead of the NCAAs 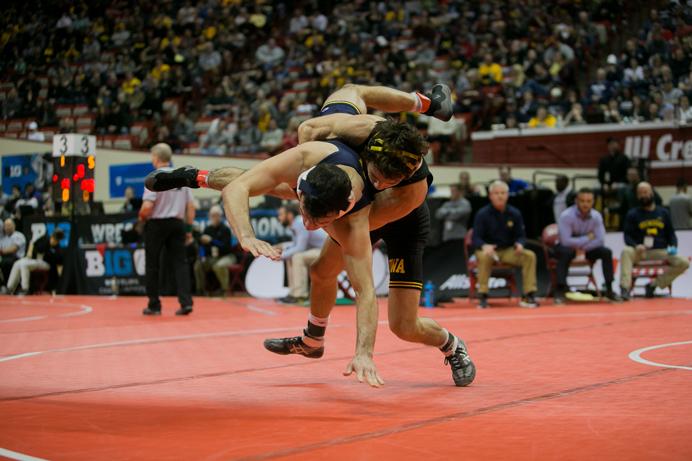 Before this weekend, Gilman was a lot of things: No. 1 in the country at 125 pounds, undefeated on the season, an NCAA runner-up, and an All-American. Now, he finds himself on top of the best conference in college wrestling.
But there’s still work to be done, and Gilman was the first to say that. There’s still another thing he’s chasing that he’s never won before, and that’s an NCAA Championship.

“It’s probably something that I’ll appreciate when I have kids and grandkids, looking back, say ‘Hey, I won the Big Tens as a senior,’” Gilman said. “Right now, I’m antsy to get back to Iowa City and get back to work. Sorry for everyone that wants to ‘Hoorah, we did it,’” but this is just one step along the way.”

Throughout his career, Gilman’s been in the shadow of 133-pound senior Cory Clark. A fellow lightweight, Clark has placed fifth or better at NCAAs in each of his past three seasons. Finally, Gilman is getting time in his own spotlight.

He’s been masterful in his craft all season on his way to keeping a perfect record. He’s solved the puzzle of every opponent he’s faced and has scored bonus points in 23 of his 27 wins.

He has been able to dictate what happens throughout each match, leading to a strategized destruction of each opponent.

All of that will come into play when he tries to become Iowa’s first individual champion on a national level since Tony Ramos accomplished the feat in 2014.

Gilman came to Iowa in a highly touted recruiting class ranked No. 1 in 2012 that included Cory Clark, Sammy Brooks, and Alex Meyer.

Since then, the group has collected quite the number of accolades.

All have different makeups off the mat, but all have also earned All-American honors by placing at the NCAAs.

Though they have different personalities and achievements, they all have at least one thing in common: They’re really good at what they do.

Even though Gilman has reached the pinnacle of Big Ten wrestling, he will still have his doubters.

Some might say he had an easy path to the finals, because Penn State’s Nick Suriano forfeited the tournament with an injury and Minnesota’s Ethan Lizak had already been defeated.

But Gilman has one message: It doesn’t matter who they put across from him. Either way, he’s going to go all out and try to pick his opponent apart no matter who it is, just as he will one last time at nationals in St. Louis. That’s something nobody can take away from him.

“I wrestle whoever’s out on the mat. I want to wrestle the best guy,” Gilman said. “Today the best guy was on the mat, so you can’t take anything away from me from winning the tournament … Whoever they put across there. It could be King Kong. I’ll wrestle him, I don’t care.”