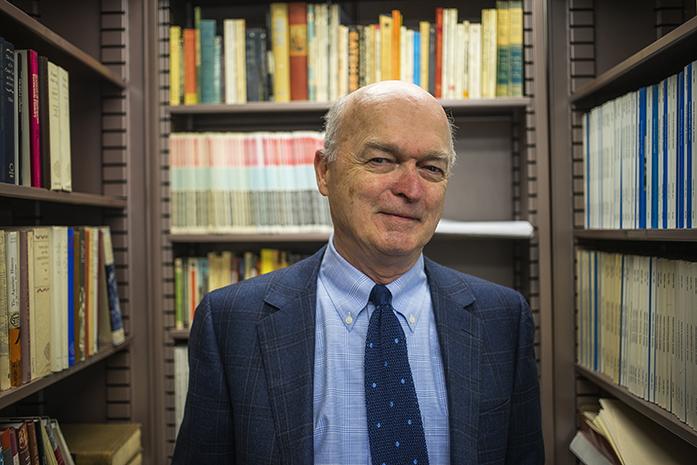 Professor Raymond A. Menzter poses for a portrait on Tuesday February 28th, 2017. (The Daily Iowan/James Year)

The French government will make a University of Iowa professor a knight in the Order of the Academic Palms for his work and dedication in his research of the French Reformation, a religious movement.

In 2001, religious-studies Professor Raymond Mentzer was chosen by the UI as the first inaugural Daniel J. Krumm Chair in reformation-studies. Mentzer will receive the French award on June 12 at the École Pratique des Hautes Études, a research and higher-education institution in Paris.

“Iowa has given me the opportunity to teach in the areas that interest me the most and has been very generous in supporting my research,” he said.

When Mentzer was notified about the award, he said he was surprised and pleased to hear about the achievement. He said his family has taken much pride in him as well, specifically his daughter, who posted an interview with him on IowaNow on Facebook.

“I think there were 150 responses to it; that’s probably because my daughter has a lot of friends on Facebook, but it was very gratifying,” he said.

While studying as an undergraduate, the height of ecumenism, the movement toward worldwide Christian unity, occurred, inspiring Mentzer’s current research, he said.

He believed it would be interesting and useful to study the origins of the fracturing of Christianity in the 16th and 17th centuries if they were going to find ways of repairing the fissures, he said.

“I have a deep and abiding love for France. My language training was mostly in French, and this was a topic that interested me enormously,” Mentzer said. “So everything kind of converged to make this an obvious choice.”

His achievement, naturally, did not go unnoticed by his colleagues.

Jenna Supp-Montgomerie, a UI assistant professor of religious studies who met him during an interview for her position, has now known Mentzer for around three years.

“We’re thrilled for him,” she said. “His work is extraordinarily nuanced and absolutely deserving of this honor.”

UI graduate student Kyle Dieleman, who has known Mentzer for six years and was his doctoral student during his fifth year, also praised the professor.

“I think it’s great he’s being awarded this, Dieleman said. “He’s certainly deserving, and the recognition I think speaks to the quality and significance of his work. So I’m very happy he’s being rewarded for all of his work.”

UI religious studies Associate Professor Morten Schlütter was excited to hear about Mentzer’s award, and he noted that it will reflect well on the department and the university as a whole. He worked with Mentzer when he was the director of graduate studies.