When women band together to end a war 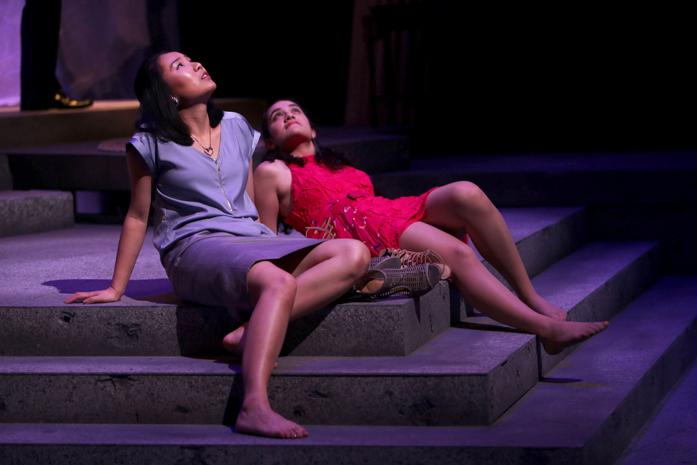 Revolution — let alone peaceful revolution — is not the easiest notion to wrap your head around. However, the play Welcome to Thebes, opening  at 8 p.m. today in the Theater Building’s Thayer Theater, tries to upend that belief.

While the story takes Greek antiquity as its thematic backdrop, it is actually based on the Liberian civil war and the women’s movement that stopped it.

The movement’s women, in an act of protest, entered into legend when they donned white shirts and walked into the line of fire, forcing the warlords into peace talks. As a result of their bravery, a peace deal was reached, bringing about change and a newfound democracy — and the country’s first female president.

Writer Moira Buffini’s Welcome to Thebes, which runs in Iowa City through March 11th, premièred at the Royal National Theatre in London in 2010 in a production directed Richard Eyre.

Today, Emelia Asiedu, who plays Eurydice in the UI production, found a newfound degree of inspiration and power in the women’s act of rebellion.

“It seemed like [the women] were powerless, and every day they showed up to a park and sang,” she said. “They drew such attention to themselves until the leader of one of the factions had no choice but to meet with them … No matter how dire the situation seems or feels, there is some level of power.”

Director Paul Kalina said this is part of a larger increase in the popularity and presence of women’s movements around the world.

“You see the power of the woman, you see in that story … what we’re going through globally right now,” he said. “We’re seeing the end of the patriarchy … it’s lived its course and hasn’t done particularly well, and we’re seeing women’s movements rising up all over.”

Kalina noted that the women would not sit idly by and instead took control of their lives and their country.

“[Buffini is] using these myths in order to tell the modern versions of Greek myths,” he said. “[She’s] twisting and turning them, wrestling with destiny and free will, the modern age and the past. Women are not the victims of destiny; they will use free will to shape the course of our lives.”

William Goblirsch worked with the idea of learning from political leaders to exude confidence — the knowledge that one has all the power in one’s hands.

“We see them give speeches, and we see videos of Putin.” he said. “He was reprimanding factory heads and demanding they sign these contracts to give the jobs back. He had all the power in the room, and he knew it, so he had to do very little. There was this one moment where he demands a guy come up … He holds out a pen for him to sign it. The guy walks over and signs it.”

Taylor Edelle Stuart, who plays Thalia, said the show is different from many she has been in because of the topics it tackles and the emotions it will invoke in the audience. Perhaps the most prominent one is the feeling of being made uncomfortable and being unable to relieve it.

“Viewers like a comfortable experience,” she said. “[Welcome to Thebes] is immersive and visceral in the sense the audience can’t escape what they’re seeing. They can’t turn their head away from what they’re seeing … It brings these horrible, atrocious things people have witnessed to the forefront and people can’t avoid it.”