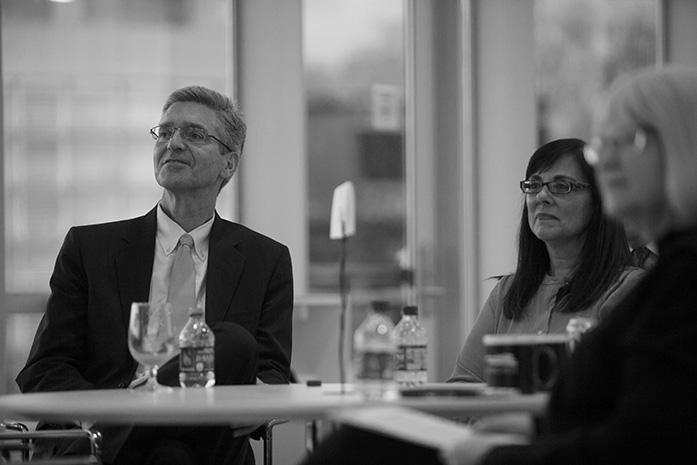 P. Barry Butler is the man who knows everyone.

In August 1984, Butler finished his Ph.D. and started working at the University of Iowa, beginning as an assistant professor in the College of Engineering and then working his way up to professor.

Eventually, Butler got involved in administration and became the dean of the school. Around six years ago, he became the interim provost, then provost, and he has remained in that position until now.

“You have to really like and work well with the people around you and that includes the president,” Butler said. “I’ve been very lucky; I’ve had some really great people.”

Along with his other responsibilities, Butler continues to teach classes. He said it’s his desire to continue teaching and that helps him stay connected with the students and his discipline.

“He truly likes teaching,” said Lon Moeller, the UI associate provost for Undergraduate Education and dean of the University College. “That makes him a really effective administrator as well.”

Moeller said Butler’s personality and his understanding of the campus will be hard to replace.

“Barry is a great boss. He’s laid-back, he’s really well-organized, and he lets the people in our office come to him with ideas, and then he supports the ideas we have,” Moeller said. “He really has a passion for the university.”

Butler is leaving Iowa to take up his new position as the president of Embry-Riddle Aeronautical University in Daytona Beach, Florida, on March 13.

Butler is referring to his background in aerospace engineering, which he has had an interest in since he was 9 or 10 years old.

“I had this opportunity, and I didn’t think twice,” Butler said. “It was perfect for me.”

“It’s really hard to replace 33 years worth of experience,” Moeller said. “He knows pretty much everybody on campus, and he knows how this place works.”

Butler said he will miss many things about the campus — the community, the students, the football games, but mostly the people.

“The people here are very, very close to this institution … and not just faculty, staff, and students, but alumni and others,” Butler said. “So there is this body of people who just love this place, and that’s good. It makes your job a whole lot easier.”

At a reception to honor the work of Butler on Wednesday evening, Harreld and UI Student Government President Rachel Zuckerman said their goodbyes.

“All students benefit from the way he fosters collaboration and pushes boundaries,” Zuckerman said. “And I’m confident he will bring the same sense of visionary leadership to Embry-Riddle.”

“He is going to do a wonderful job [at Embry-Riddle],” Harreld said. “We are all really, really proud.”

Moeller said Butler will be missed.