Finding a home in faith 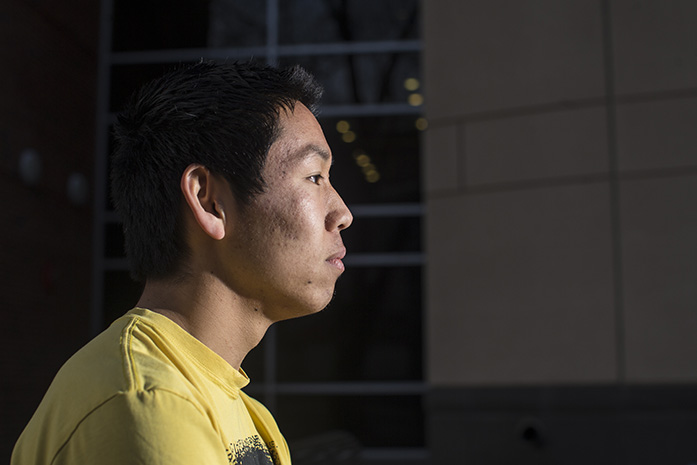 For some Christian LGBTQ individuals on campus, finding a ministry that is fully accepting can be a long and painful process.

University of Iowa sophomore Marcus Miller has seen the effects that this conflict between ideology and identity can have.

“When I was a freshman here at Iowa last year — before I was fully accepting of myself and accepting of my identity — I was still very much involved with Christian organizations,” Miller said. “Those organizations were where all my friends were, where my support system was, and as I continued to try to figure things out on my own and figure out my identities, I think things got really tough for me, because it came increasingly clear that if I were to be proud of my identity of being gay, that would not be OK.”

Miller applied for two different leadership positions with Business Leaders in Christ and 24/7 and was officially offered a position with the first group, and 24/7 had allegedly implied to Miller he would get a position. After revealing to them that he was gay, both offers were rescinded.

In response, Business Leaders in Christ declined to give a statement to The Daily Iowan, and 24/7 released the statement, “24/7 welcomes all members of the university community to its meetings and is confident that the complaint is without merit.”

“That really hurt,” Miller said about the withdrawn offers. “I felt rejected, I felt isolated and alone. What once used to be a home for me and a place where all my friends were, where I got all my support, quickly became the place I dreaded the most. It was so hard for me to be rejected by the people I thought would accept me. There was a lot of nights where I wouldn’t be able to sleep, there were a lot of nights where I contemplated suicide. I felt stuck between two different worlds.”

Miller said he felt conflicted between his traditional conservative Christian community and the LGBTQ community. He said he hadn’t fully accepted himself and he wasn’t sure he could be understood with his intersectionality of faith and sexuality.

“It was definitely the hardest time period of my life,” Miller said. “Faith is a very sacred thing; a lot of people cling to it. My faith is still very important to me. I feel like for a lot people, that’s the case, and a lot of people are trying to hold on to their faith, but it makes it extremely difficult when the spaces that they’re in are not accepting and not inclusive.”

The written finding of the investigation will typically be issued within 60 days of the complaint being launched.

After being denied leadership roles with other organizations, Miller founded Love Works, an LGBTQ-inclusive campus ministry.

While there are numerous interpretations of Bible scripture, some Christian interpretations classify homosexuality as a sin. This can create challenges for LGBTQ individuals who seek involvement in Christian communities.

“From my understanding, it is God loves all human beings, and He created them in His image,” said Nana Owusu, the president for Campus Bible Fellowship. “But from our understanding, sin has marred that image, and the way that it’s been marred has manifested itself in various different ways. What the Bible clearly states in both the Old and the New Testament is that homosexuality is an abomination. So it is not what He intended that relationship to be like.”

Despite any ideology, LGBTQ individuals are welcome to attend meetings and be involved with Campus Bible Fellowship.

“But according to our stance, if people say that they have belief in Christ, there’s bound to be an understanding that there is sin there, because if they truly do believe this, then they do understand that there is sin, and they are fighting that sin in their life, just as I would have to fight urges of lust, just as I would have to fight anger or hatred,” Owusu said. “You can come to the meetings, we can have that conversation, and we can’t force you to live a life that exemplifies a Christian, but we would like to see that growth in each member.”

To be a leader, individuals must profess a belief in Christ and attend meetings regularly, he said. Leaders are approved by leaders in the affiliated church, Faith Baptist Church.

John Johnson, a campus minister for Campus Christian Fellowship, said the organization’s interpretation of scripture is that homosexuality is a sin, which he said is plainly stated in the Bible.

“I do know that there are people who have different interpretations, but that’s how I read the Bible, so that’s something that we do preach, but we don’t tell people to go away, because it’s one of those things that we believe in preaching and talking about Jesus first, and Jesus is the most important thing,” he said. “So if we prevent people from coming, or make people feel as if they can’t come and be a part of it, how are they ever going to hear about Jesus?”

The ministry has had LGBTQ members in the past, and they are welcome to come to meetings, Johnson said. While choosing leaders for the organization, he said, the group has moral and ethical recommendations and wants leaders to be good role models.

“We ask for them, for their sexual activity, to follow what the Bible prescribes,” Johnson said. “I wouldn’t say that we would ever just outright [reject] any person who wanted to become a leader who was part of that community; we wouldn’t just say, ‘No, you can’t because you’re a part of that community.’ We would talk to them about what does your life look like, and where are you with all these things, and what do you believe scripture says about these things. It’s a lot of just seeing where they’re coming from with what scripture says, because we do want to have a unified teaching we’re presenting.”

The issue becomes complicated, as ideology and religious freedoms could potentially conflict with an anti-discrimination clause that all UI student organizations are required to include in their constitutions, which states, “In no aspect of its programs shall there be any difference in the treatment of persons on the basis of … sexual orientation, gender identity … which would deprive the person of consideration as an individual.  The organization will guarantee that equal opportunity and equal access to membership, programming, facilities, and benefits shall be open to all persons.”

The 2010 Supreme Court case of Christian Legal Society v. Martinez dealt with a similar incident regarding campus ministries and the LGBTQ community.

Christian Legal Society required members and officers to sign a statement of faith, in which they agreed to live by certain principles, one of which was the belief that sex was between a man and a woman. It was because the organization restricted based on sexuality that Hastings Law School denied it registered student organization status, as it conflicted with their non-discrimination policy.

Within the case, the society contended that it doesn’t exclude individuals based on sexual orientation, but rather on conduct and the belief that the conduct is not wrong; in this case, the group excludes LGBTQ individuals with partners.

The court denied to distinguish between status and conduct in the case, and referenced the 2003 case of Lawrence v. Texas in which Justice Anthony Kennedy stated in the opinion of the court, “When homosexual conduct is made criminal by the law of the State, that declaration in and of itself is an invitation to subject homosexual persons to discrimination in both the public and in the private spheres.”

In the opinion of the Court in Christian Legal Society v. Martinez, Justice Ruth Bader Ginsburg said, “[Christian Legal Society] notes that its ‘activities — its Bible studies, speakers, and dinners — are open to all students,’ even if attendees are barred from membership and leadership. … Welcoming all comers as guests or auditors, however, is hardly equivalent to accepting all comers as full-fledged participants.”

The court ruled that while it isn’t unconstitutional for a student organization to require leaders to hold particular religious beliefs, universities do not have to recognize those organizations.

Currently UISG has allocated funds in fiscal 2017 for Business Leaders in Christ and 24/7.\