UISG: No guns on campus

UISG opposes state legislation that could permit guns on campus. 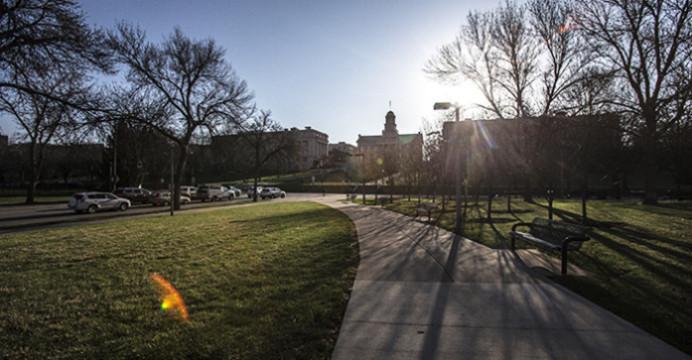 By Sarah Stortz and Charles Peckman

The University of Iowa Student Government voted on Tuesday night to oppose a bill in the Iowa Legislature that would remove the state Board of Regents’ power to ban firearms on school grounds.

The resolution was proposed by UISG Sens. Jenna Pokorny, Andy Han, and Mitchell Dunn, in response to a recent proposal in the Iowa Senate.

The bill, known as SF256, was introduced by Sen. Jake Chapman, R-Adel. It proposes that anybody with a permit should be allowed to carry a weapon on university grounds.

“I felt an overwhelming sense that it was taking delegated rights away from the Iowa Board of Regents,” Pokorny said. “I also felt a concern for safety on campus.”

Dunn said had issue with Chapman’s not consulting with students when creating the legislation.

“Another major concern was that the sponsor of the legislation didn’t talk with students at all, and this is a bill that would obviously affect students,” Dunn said.

Pokorny agreed with Dunn on the issue.

“It directly affects students, and it’s a bill that’s specific to only college campuses,” Pokorny said. “It seems logical that before you write a bill, you would speak with university faculty, students, and administration before preceding to write the bill.”

Under the current circumstances, Dunn said, there is no telling if the bill will become law.

“Hopefully, our advocacy efforts and the Board of Regents’ advocacy efforts against this bill will work,” he said. “That’s where we’re at right now, and that’s why we passed the resolution, so we can stand firmly against it.”

UISG Sen. Nate Weger, after voicing his concerns about the UISG resolution, abstained from voting.

Weger said that there are many misconceptions about guns — not only in the context of their possession on school grounds, but in a general sense.

“I feel as though there are a lot of senators who are strictly pro-gun or strictly anti-gun,” Weger said.

This polarity among his fellow senators, he said, as well as discrepancies in the language of the legislation, is why he chose to abstain from voting.

Weger pointed out that he tried to incorporate his own research about guns into the Senate’s dialogue about the legislation, but his efforts were fruitless in changing senators’ minds on the controversial topic.

“I tried to bring my own research into the discussion, but a lot of the senators are polar on this issue,” he said.

Because the resolution was approved by the student Senate, Pokorny said, she hopes that the Iowa legislators would be able to hear the voice of the students.
“Now the Iowa Legislature should know that the University of Iowa student body has said this is something we wouldn’t want to have on our campus,” she said.