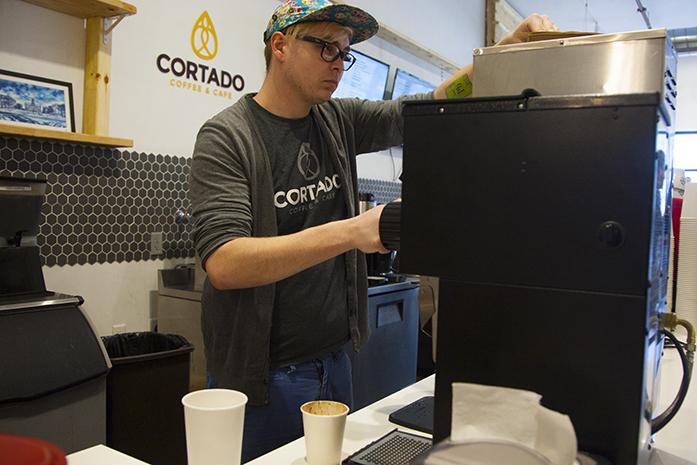 An employee makes tea at Cortado Coffee & Cafe on S. Clinton st. on Thursday, Feb. 23, 2017. Businesses all over Johnson County will be impacted by the change in minimum wage. (The Daily Iowan/Lily Smith)

For the first time since 1997, the Republican Party has control over the Iowa House, Senate, and governorship. Recent research presented on Feb. 24 by Chris Witko, an associate political-science professor at the University of South Carolina, shows that this may boost economic inequality throughout the state.

Economic inequality has been a long-standing issue across the nation, and Witko said states are beginning to address it based on their political leanings.

“The biggest thing that affects the answer to the question ‘the rich are getting richer and the poor are getting poorer?’ is state partisanship, so the aggregate percentage of people in the state who are Democrats is related to the aggregate percentage of the people who will answer yes to that question,” Witko said. “Liberal governments lead to less inequality than would otherwise be expected given underlying economic characteristics.”

Witko also said liberal governments were more likely to introduce legislation that would raise the minimum wage, and that states with higher minimum wages have less inequality.

This has become relevant with House File 295 being recently introduced by Rep. Jake Highfill, R-Johnston, in the Iowa House Local Government Committee. The bill would affect four counties in Iowa, including Johnson County, prohibiting them from raising their minimum wage above the state’s minimum wage.

Highfill and other Republican legislators did not respond to The Daily Iowan requests for comment in time for publication.

“All it’s really doing is taking control of minimum-wage policy in Iowa at the state level and denying it to the counties,” said Bill Keettel, the recently retired Johnson County Republican chairman. “It’s a redefinition of who has the authority to set minimum wage in Iowa. There ought to be a single statewide minimum wage, and if there’s to be a change in that, it would come at the state level.”

According to the most recent data from Politico, three out of the four counties in Iowa where the minimum wage exceeds the state minimum wage voted majority Democratic in the last three elections.

Since November 2015, the minimum wage in Johnson County has been gradually increasing in 95-cent increments every six months or so. Mike Owen, the executive director of the Iowa Policy Project, a nonprofit, nonpartisan research organization, said the latest increase in the Johnson County minimum wage, on Jan. 1 to $10.10, directly benefited 10,100 workers. Eighty-two percent of this group worked more than part-time, and the majority were above the age of 20.

This has led to a revival of a debate from 2015 about whether individual counties have the authority to institute their own minimum wages.

“Obviously, there are some counties here that are dominated by people who are against the government of Iowa; Johnson is one of those,” Keettel said. “They want to embarrass the government of Iowa by pretending to be more generous than the state, but the state is [the] economic entity, not the individual counties. It doesn’t lie well in Iowa City because Iowa City gets a very substantial amount of its revenue from state expenditure, and for Iowa City to go against the state is counterproductive.”

This had led to backlash from the other side of the issue.