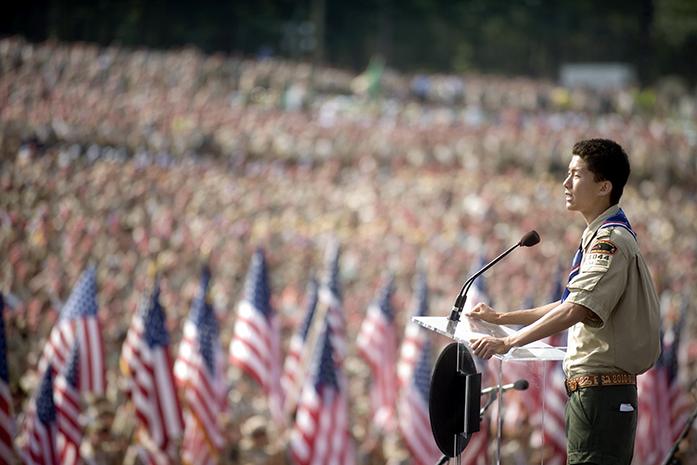 In January, there was a small victory in the ongoing fight for gender equality: in an unprecedented gesture of inclusiveness, the Boy Scouts of America welcomed transgender kids into the fold. The organization, notorious for its adherence to traditional conservative values, now permits trans youths to wear neckerchiefs and badges along with their cisgender comrades.

Swell, I thought to myself. Such a decision is surely evidence of progress toward a more generous definition of gender and progress in the face of increased prejudice. I was proud of the Boy Scouts for dropping its historical policy of admitting kids based on the identity on their birth certificates. I was excited for cis and trans folks alike to share the real joy of Scouting — which has more to do with enjoying hands-on adventures in the outdoors and serving the community than with cultivating gendered personhood.

But one aspect of the little triumph seemed slightly off. If the purpose of Scouting is to create well-rounded, philanthropic, rough-and-ready American individuals of any gender, then why do we have separate organizations for boys and girls? I recalled my indignation when, as an 8-year-old Brownie, I learned that our troop would not go camping or learn to whittle like the Cub Scouts that year. Instead, we’d make macaroni jewelry and sell cookies. I quit soon after hearing this announcement from our Troop leader and promptly asked my father for a Swiss Army knife. How difficult it would have been — in fact, completely taboo — if I attempted to join the Boy Scouts just to get a better wilderness education.

Cordoning off kids into gendered categories doesn’t allow for the universality of the Scouting mission. Isn’t it about time to drop the whole artificial system? The Boy Scouts created an ideal moment to re-evaluate the gender divisions enforced by Boy and Girl Scouts, and I readied myself to argue in favor of non-gender-specific programs for adventurous youths.

Then, on Feb 22, the Trump administration reversed the progress instigated by the Boy Scouts — albeit in a different area. Gone is the legislation that once permitted transgender bathrooms. Despite the generous gesture of the Scouting community, the cause of gender equality has experienced a considerable setback. Somehow, the Trump administration hasn’t noticed the growing awareness and tolerance of non-cisgender identities; somehow the people in the White House got the idea that trans folks don’t need support from their communities and the nation.

If the recent retraction strikes you as a great idea, consider these points — gender-neutral bathrooms are a no-brainer. You’ve probably experienced such facilities already and thought nothing of it. Bathroom trips would be efficient and convenient; no longer would women suffer through the eternal “ladies’ room line.” New facilities might need to be constructed, but often the only thing that must be altered is the signage. Plus, stalls and single-occupant facilities offer privacy for everyone. The transition, in this case, would be simple, logical, and beneficial to all populations.

Whether manifested in bathroom legislation or changes in Boy Scout admissions criteria, gender equality initiatives are contested yet vital. The Boy Scouts introduced a progressive agenda, and we must follow that trend instead of accepting Trump’s backwards policies. Discrimination is not the new normal. The Boy Scouts’ new policy proves there’s still hope. We must redouble our efforts to erase the prejudices against non-cisgender folks — and embrace all kinds of bodies.