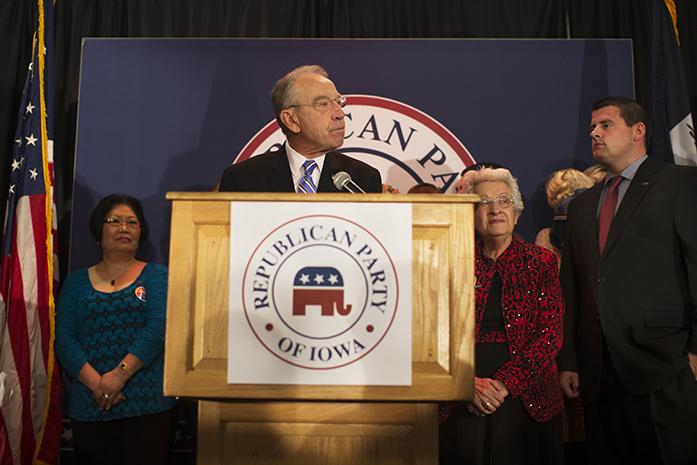 Chuck Grassely speaks at the GOP's Election Night Party at the Marriott in Des Moines, Iowa on Tuesday, Nov. 8, 2016 shortly after it was announced that he won a 7th term in the U.S. Senate. Grassely touched on topics including national security and making sure Iowan values are represented in Washington. (The Daily Iowan/Brooklynn Kascel)

Iowa politicians differ in their opinions of how much government influence should be present in the funding of potential renewable-energy projects. One project in the works is the ElectriciTree, a prototype that scientists at Iowa State University developed that works to convert wind energy into electricity.

Professor Eric Henderson and Associate Professor Mike McCloskey of the ISU Genetics, Development, and Cell Biology Department began the ElectriciTree project about seven years ago. Curtis Mosher, ISU Carver Lab manager, joined the team in the past two years.In the beginning, the team had trouble finding funding from the state. The members tried the Iowa Power Fund but were denied after the first round of proposals. They then went to the Department of Energy and received around $150,000 for the project from the National Science Foundation in 2010. That funding ran out in 2016.

Henderson said he believes the project could end up being something useful, but he doesn’t know if it will come to fruition because of economic resources.

“The problem is that the world is driven by a cost-benefit analysis,” he said.

Iowa is currently a nationwide leader in wind energy, getting 31 percent of its electricity from wind turbines.

This is not an accident. State energy policies were changed under former Democratic Iowa Gov. Tom Vilsack; laws were put into place to make it possible for utilities to build and make money on wind turbines.

“We anticipate with just the investments that are underway that 40 percent of our [Iowa] electricity could come from wind power,” Sen. Rob Hogg, D-Cedar Rapids, said.

Sen. Chuck Grassley, R-Iowa, said he would support anything when it comes to alternative energy in Iowa, as long as it is technologically and economically feasible.

“If it can be more efficient, then obviously the marketplace is going to take care of that,” Grassley said.

Hogg disagrees, saying the marketplace will not sustain energy “unless government creates a marketplace that reflects the environmental and national security and health problems associated with dirty energy.”

Since the end of the Iowa Power Fund in 2010-11, Hogg said, the state hasn’t directly done a lot of investment.

“Not only does the government have a role to play in creating new, clean, energy and the research and development of them, I think there’s an ongoing need to support those technologies,” Hogg said.

Sen. Kevin Kinney, D-Oxford, said a lot of the solar power in Washington County is funded from state and federal rebate systems. There is a tax credit on solar power across the state, allowing it to be economically sustainable.

“I think the more we can do to be dependent on renewable energy, I think the better,” he said. “But we have to have a balanced budget also.”

Kinney said he believes in a balanced approach between the market and the government.

“I agree that once we get markets up and going for wind energy that it will be much more sustainable,” he said. “It takes a certain amount of government intervention for these companies to be sustainable in the beginning.”

Johnson County Republican chairman Matt Evans agreed with Grassley that the markets should sustain the energy economy instead of the government.

“If an energy source is viable, then the market will provide it to the consumers who need it and much more cheaply than the government would,” Evans said.

The ElectriciTree could potentially be an off-grid source of electricity to power daily household items, such as light bulbs or vacuums.

Using cottonwood leaves as a model, a tree common in the Midwest, the researchers tried to produce electricity similar to how leaves move in the wind.

To spark the energy, piezoelectric Kynar — a small scale, plastic type energy source — is used as the stems of leaves. When the Kynar is moved, it sparks electrons that can then be directed and potentially harvested in batteries.

The limitation to the piezoelectric approach has been that the materials used don’t produce a great enough current to generate enough power. Power is the current multiplied by the voltage, so there needs to be a high current to produce enough power.

“I think that the method has high potential speaking literally, the voltage it can produce in the wind is quite large, the limitation is the current is still miniscule,” McCloskey said. “If we can amplify that a few orders, then we can approach a practical device.”

There are still many other factors waiting to be developed, such as the inability to produce enough current, as well as where to store the electricity when the power becomes great enough.

“I know that this technology is viable and can be developed,” Henderson said.

The project was initially Henderson’s idea. He was looking out the window of his office one day, observing the way leaves oscillate in the wind and in doing so, turn wind energy into kinetic energy. After doing some calculations, Henderson said, he was extremely optimistic about the amount of energy that could be produced from the way leaves move.

His daydreaming led to a proposal. He teamed up with Mike McCloskey, and together they worked to bring the idea to life.

In the beginning, McCloskey was skeptical about whether it would work. During an Iowa winter, the leaves could freeze. There would also be a lot of maintenance involved to take care of the ice around the electrical connections. Despite limitations, he took it on as a challenge.

Mosher was involved in what he said were the nuts and bolts of the project, testing the idea and solving limitations.

“While we’re several magnitudes away from where we want to be, we have to start somewhere,” he said.

There have been criticisms of wind turbines across the country, some coming from President Donald Trump, saying they block the skyline, are too loud, and are a danger to birds. This tree would not replace wind turbines, but in comparison, Mosher said, they are more aesthetically pleasing.

A company in France has been developing something similar to this for years. That model takes the shape of a tree, but with small, vertical, leaf-like shapes acting as wind turbines.

When asked if he would follow through with seeing this project come to fruition with the money needed to sustain it, Henderson replied, “Hell, yes.”