Student Government votes to stand in solidarity with undocumented and DACA students at the UI. 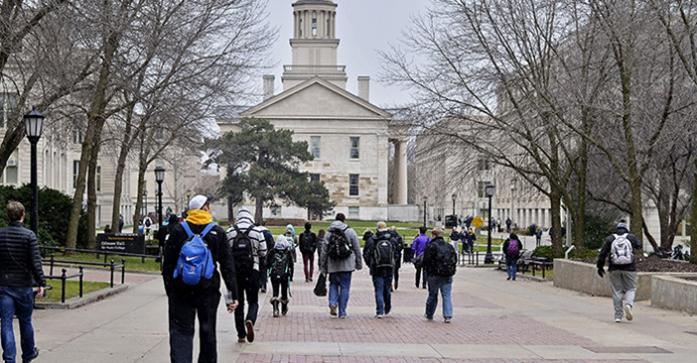 Students walk down the T. Anne Cleary Walkway in-between classes on December 2, 2015 at the university of Iowa. (Daily Iowan/Karley Finkel)

The University of Iowa Student Government will stand in solidarity with undocumented and Deferred Action for Childhood Arrival students attending the UI after passing a resolution on Tuesday.

The move is in response to the new presidential administration putting the DACA program at risk of being dismantled.The Obama administration implemented the program in 2012 in an attempt to provide temporary relief from deportation and a two-year work permit to qualifying undocumented young adults who were brought to the U.S. as children.

“[The DACA program] affects a number of students on campus, and any changes to the program will affect them, too,” Sen. Angela Guerrero said.

The resolution proposed that UISG stand in solidarity with these students at the UI as well as support the continuation of the DACA program through the BRIDGE Act.

That act is a bipartisan legislation piece introduced by Sens. Lindsey Graham, R-S.C., and Dick Durbin, D-Ill., that would allow people who are eligible or who have received work authorization and temporary relief from deportation through the DACA program to continue living in the U.S. with permission from the federal government for three years.

If passed, the BRIDGE Act would be a law and less subject to change.

In Iowa, a piece of legislation, HF265 (formerly HSB67), was introduced in the House of Representatives that would prohibit the state, counties, cities, and postsecondary educational institutions from limiting or restricting the enforcement of federal immigration law.

The resolution passed by UISG urges the Legislature to stand against HF265.

“Higher education is really important to the success of the nation as a whole. Any sort of limitations to someone’s right to education in our eyes prohibits the nation from flourishing,” Sen. Lilian Sanchez said. “That’s why I think it’s important for the university to stand in solidarity with individuals who may not have had the privilege to attend higher education but have been granted it [through DACA] that are now up for debate nationally.”

According to the U.S. Citizenship and Immigration Services, 5,454 Iowans have applied for DACA since its introduction.

The resolution contended that if the program were dismantled, it would lead to hundreds of thousands of DACA participants losing their lawful presence and work authorization in the United States, including students at the UI who have benefited from the program.

“If we want to create an inclusive environment on campus, we have to stand together and support people who are a part of minorities or programs like DACA,” Sen. Gustave Stewart said.

This isn’t the first time people at the UI have taken a stance on DACA.

Earlier this year, UI President Bruce Harreld, along with 545 other college and university presidents around the nation, signed the Pomona College letter urging businesses, religious, civic, and nonprofit sectors to support DACA and undocumented immigrant students.

The Association for Big Ten Schools also passed a resolution, cosponsored by the UI, to join more than 550 college and university presidents in their call to uphold and continue the DACA program and its support of undocumented and DACA students at every Big Ten university and across the country.

“[The passing of this resolution] shows me that senators understand that lives are at stake, and it’s not just about politics all of the time,” Sanchez said. “It is important for the people who have the privilege to speak about issues [such as the dismantling of the DACA program] to advocate for individuals who are affected by these policies.”