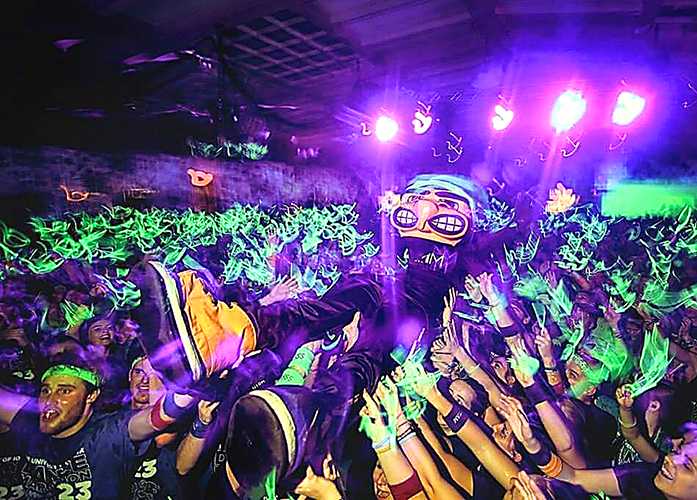 Throughout the 24 hours, a variety of moments and events had a big effect on all of those who participated, whether they were a dancer or family member in the Dance Marathon organization.

Some of the events that will be remembered when people recall Dance Marathon 23 include a bone-marrow-donor drive, the “short hair, don’t care” event, and the Dance Marathon graduation.

Be the Match, a UI student organization, put on a drive for bone-marrow donors during the event in hopes of attracting new people to the program.

It attracted a lot of donors for various reasons. For dancer Alexandria Feldmeier, becoming a donor was about having the potential to save someone’s life.

“They said that only one in 500 people [who register to donate] get chosen, and just one of those lucky people could save someone’s life,” Feldmeier said. “It’s not often that you find someone whose an exact match, so the fact that I could be that match to that one person to save someone’s life is really meaningful.”

Another event that was also put on to serve others was the “short hair, don’t care” event, in which people could cut and donate their hair to people going through chemotherapy or shave their heads to show support for those battling cancer.

“Hair grows back. With these kids, some of them don’t have the ability to grow hair because of chemo, and if I can give that to them, I’m going to,” said dancer Caley O’Brien, who both donated her hair and shaved her head.

An exciting event that is a milestone for many of Dance Marathon’s families was the Dance Marathon graduation, in which kids who have been cancer-free for five years graduate and celebrate being cured.

“I feel like this is the best graduation I could ever attend in my life. I don’t see this as a graduation, I see this as a parade of 20 victorious soldiers who did not pick the fight but won,” said Arun Modi, a UI clinical assistant professor of oncology who spoke at the graduation. “Childhood cancer is rare; no family thinks about it, prepares for it, or has any idea how to deal with it.”

Along with various events throughout the 24 hours, a variety of initiatives took place.

This year, the organization partnered with the UI Office of Sustainability to make the Big Event more environmentally friendly.

“It’s an awesome partnership,” said Sustainability Committee head Matt Hoffman. “We all just want to help the environment while helping our kiddos and their families.”

As always, the Dance Marathon kids and “Dancing in Our Hearts” kids, who have passed away, were honored in various ways.

At the Big Event, the IMU Main Lounge was decorated with pillowcases along the walls, each bearing the name of a Dance Marathon child. In the back of the room on the balcony, three quilts were hung, bearing the names of the Dancing in Our Hearts children as well.

“It’s important to us that every kid feels that love and they all know that all of us are behind them, so every single one of them has their name on the wall, and they can say ‘That’s me, everyone is dancing for me,’ ” said Christie Crossman, the Dance Marathon hospital director.

There was also a room dedicated to the Dancing in Our Hearts families where dancers could go to honor those who have passed away.

The money raised from this year’s Dance Marathon will be used to support families who are dealing with pediatric cancer as well as research and many other things that play a part in the battle against pediatric cancer.

“Dance Marathon 23 is not defined by a number, it is defined by an army of college students with the will to fight against pediatric cancer and put an end to it,” Kennedy said.