The feet have spoken 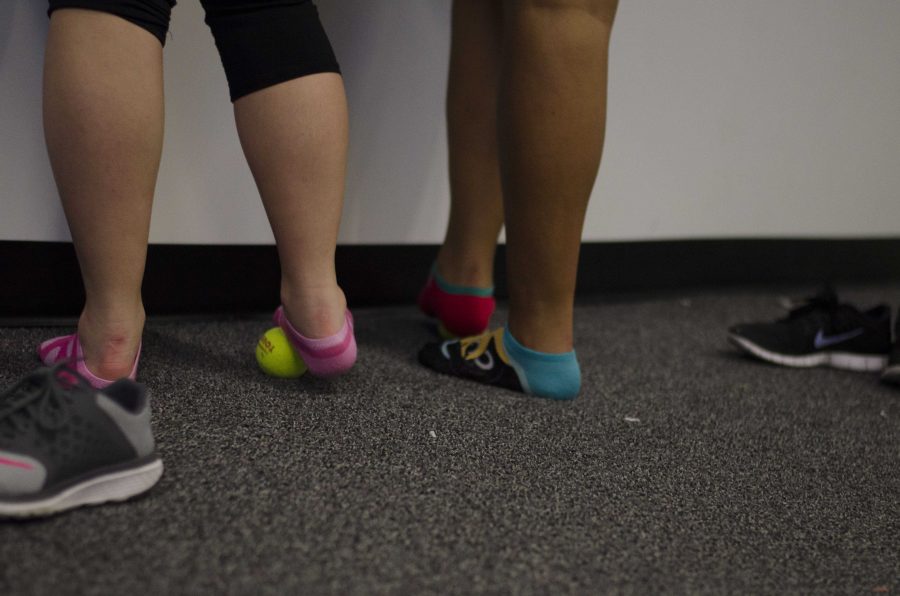 A dancer rolls a ball on her feet in the texture room during the hour 19 during the 23 Dance Marathon at the Iowa Memorial Union on Saturday, Feb. 4, 2017. (The Daily Iowan/Karley Finkel)

Three brand new rooms were introduced to the Hawkeye Room for this year’s Dance Marathon: the texture room, sumo wrestling, and laser tag.

For sumo wrestling, a dancer could grab a friend and put on giant sumo suits, and then try to push each other out of bounds. The two face off in a ring, which was a large circular red mat. Whoever stays in the ring the longest wins.

Dancer Amanda Lasko lost to her friend 8-0, but still had a good time.

“It was fun despite the loss,” Lasko said. “I enjoyed it.”

Others had a different take on the sumo wrestling.

“I was looking forward to laser tag the most,” dancer Katie Borchert said. “Sumo wrestling not so much. I don’t really want to be in a sweaty costume.”

Laser tag, however, did not live up to Borchert’s expectations.

“The line was super long,” she said. “It wasn’t really worth it.”

Laser tag was fun while it worked, but there were technical difficulties, Borchert said. The main gun broke or died and could not connect all of the other guns.

“We were basically shooting at nothing,” she said. “If the guns worked it might have been more fun.”

While there were issues or concerns with both sumo wrestling and laser tag, the texture room became the most crowded part of the Hawkeye Room.

In the texture room, there are several kiddie pools filled with different items, including marbles, tennis balls, cotton balls, and carpet. Dancers could take off their shoes and walk in these different kiddie pools.

“It’s nice to walk on something different than what you’ve been on for the past hours,” dancer Claire O’Connell said. “The tennis ball is the best because I could roll out the ball of my feet and that’s really what hurt.”

Both O’Connell and Lasko agree the texture room was the best of the three additions to Dance Marathon.

Laser tag is cool but the texture room is going to help you more throughout the day, said O’Connell.

“The sumo wrestling was fun,” Lasko said. “But I needed the texture room.”