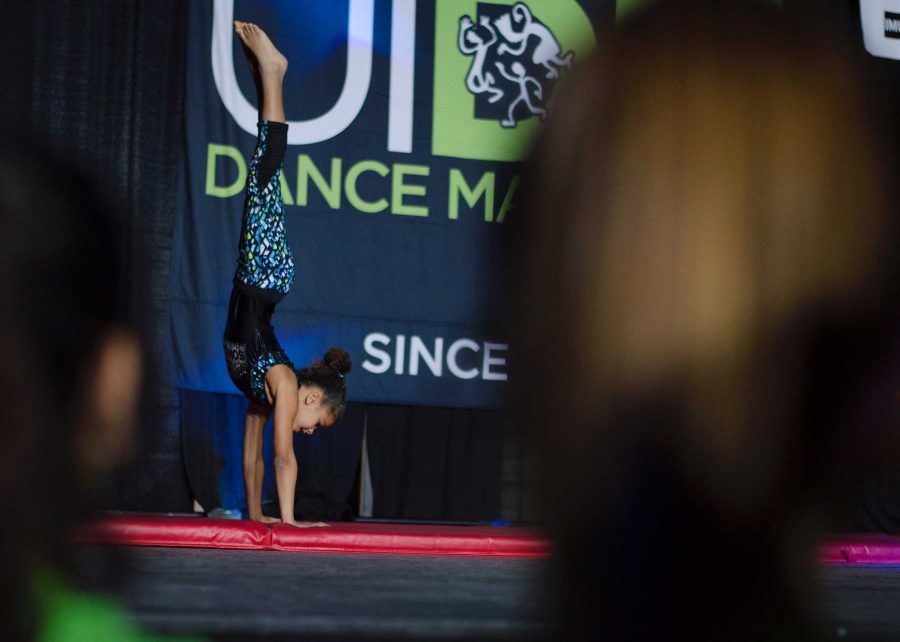 Dance Marathon kids show off their talents in the Kids Talent Show during hour 19 of the 23rd Dance Marathon at the Iowa Memorial Union on Saturday, Feb. 4,2017. (The Daily Iowan/ Karley Finkel)

As the 18th hour rolled on, the main stage was filled with dancing, singing, rapping, and improv.

The night was especially fun for some Dance Marathon children and their siblings, who were able to participate in a talent show, Limelight Talent Show, to present their abilities.

“[I like] doing the handsprings and doing the bars,” McCoy said. She has practiced gymnastics for two years, and this was her first Dance Marathon talent show.

McCoy has been cancer free for two years.

Sumner Codd, a Dance Marathon sibling, used the show to perform an original rap he wrote.

Codd started rapping two-and-a-half years ago. He was inspired to rap by listening to Kendrick Lamar after discovering a rap of his in a video game he played.

“Ever since I started in fifth grade, I’ve been listening to him a lot,” Codd said. “I feel like I can really connect with him. I want to grow up to be a rapper.”

Codd has been rapping for the past two years in the show, and hopes to continue to perform in the years to come.

Sydney Krueger, 12, performed a lyrical dance piece. Krueger has been dancing for over six years, and this is the fourth year for her at the talent show.

“[I like that] I can escape from the world, and I can talk to people,” Krueger said. “At my dance studio we do lyrical, tap, and jazz, but my favorite type is hip-hop.”