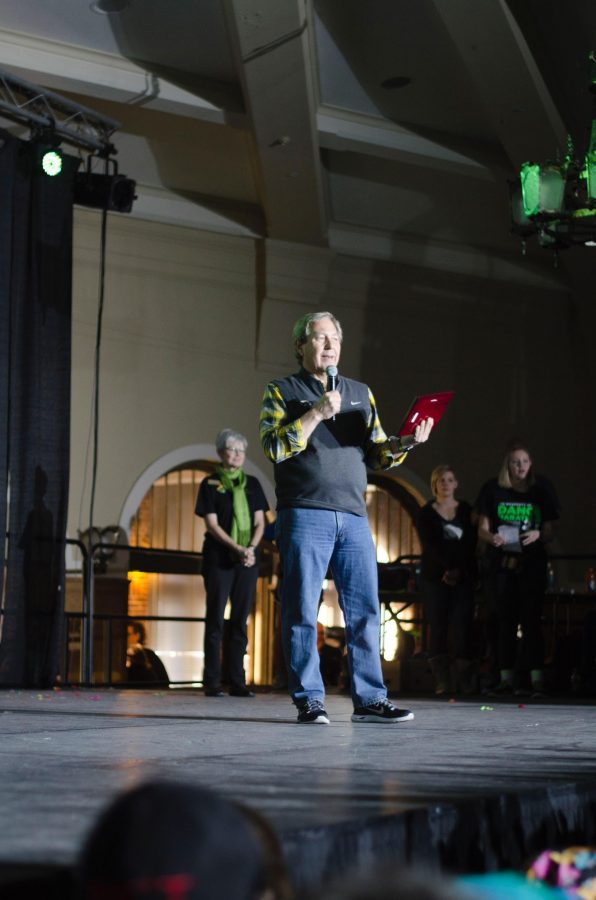 Around 30 minutes before Power Hour, Dance Marathon honors award recipients for their exceptional participation in the Big Event and other events throughout the year.

In all of the thousands of people who were involved in Dance Marathon, a few stood out.

Every year before the final family speaker and Power Hour, Dance Marathon announces the recipients of the Mary Peterson Award, Chris Metzger Award, and the UI Foundation Award.

The awards kicked off with Bill Nelson, executive director of the IMU.

“IMU has been the home of Dance Marathon for the past 23 years,” Nelson said. “We are so proud to be your home today and proud be your forever home.”

Nelson had the honor of announcing the Chris Metzger Award.

Chris Metzger was the very first executive director of Dance Marathon in 1994, he said. Metzger could not make it to Dance Marathon this year, although he normally makes an appearance.

Nelson then introduced the next presenter, Mary Peterson herself.

“Mary Peterson served for 24 years as the Associate Director of what was initially Center for Human Activities, but what you know as Center of Student Involvement and Leadership,” Nelson said. “Mary, along with two other visionary women, had the foresight and the courage to create what you know as Dance Marathon.”

Peterson took the stage and awarded her own award to the sorority Chi Omega, but not before giving a shout out to Beta Theta Pi and her own Alpha Phi sisters.

“Thank you to everyone for your commitment,” Peterson said. “[My goal] is for Dance Marathon to never go away, that it will stick around somehow and some way.”

The next award, the Young Philanthropist Award, was presented by UI Foundation CEO and President Lynette Marshall.

This award is for the member of leadership who has raised the most money, Marshall said. The recipient held leadership and responsibility while working hard to make money.

“I thank her for all of her hard work,” Marshall said. “I want to congratulate Charlie Dean.”

Dean raised more than $9,200 in three years and was the Operations Chair this year. Dean and Marshall shared a hug as the crowd cheered for Dean’s hard work.

UI President Bruce Harreld had his wife, daughter, and granddaughter on stage with him as he ended the awards with a challenge to his students.

“Look at it this way,” Harreld said. “If we can beat Iowa State in football and basketball, with your help we can also beat kid’s cancer.”