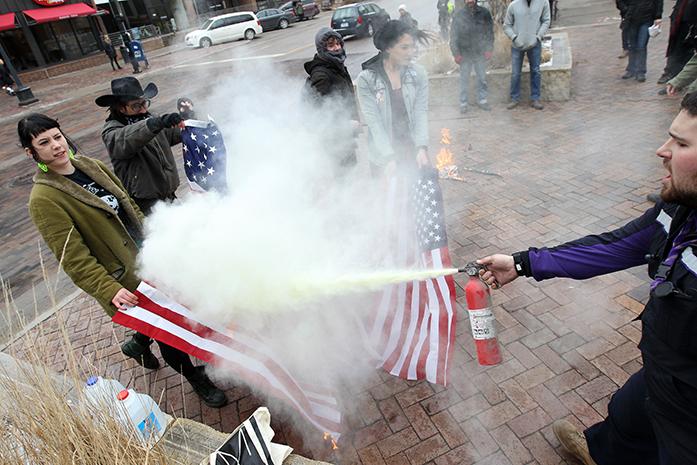 Matt Uhrin extinguishes a set of American flags being set on fire by protesters on the pedestrian mall along Clinton Street on Thursday, Jan. 26, 2017. (David Scrivner/Iowa City Press-Citizen)

A protest involving the burning of American flags that took place downtown on Thursday has received mixed views from community members.

Around noon Thursday, a group of protesters took to the Pedestrian Mall to rally against the “corrupted policies that forged America,” citing the genocide of Native Americans, the construction of the Dakota Access Pipeline, and some of America’s foreign policy as reasons to assemble.

Paul Osgerby (a former DI opinions writer) and Kelli Ebensberger, who were part of the group, were eventually cited by the Iowa City police.

The protest, Ebensberger said, was inspired by a friend’s rally, also involving flag burning, that was on Jan. 20. Thursday’s protest was held outside of Wells Fargo, she said, as a symbolic representation of corruption of the institution, which is a well-known funder of Dakota Access pipeline construction.

“One: we wanted to be further distanced from the playground,” Osgerby said. “Two: outside of Wells Fargo, pretty well-known funder of the Dakota Pipeline.”

Lyombe Eko, a professor of journalism and electronic media at Texas Tech University who teaches media law, said flag burning is legal and protected by the First Amendment.

“Flag burning is symbolic speech and expressive conduct,” he said, noting that the First Amendment doesn’t only cover oral and written speech but stretches to symbolic speech.

However, Eko said, the protesters could’ve been arrested if the flag belonged to the University of Iowa or to another person.

Ebensberger said she and Osgerby were charged with a misdemeanor, specifically violating a city-wide burn ordinance.

“The (ticket) says ‘open burning prohibited,’ ” she said. “We went into this assuming that would occur.”

Under Iowa Code, Chapter 6, section 6-6-1, open burning is prohibited, stating, “No person shall ignite, cause to be ignited, permit to be ignited, allow or maintain any open fire” with exceptions noted under section 6-6-2. That section states, “Open burning … may be permitted, in compliance with fire department guidelines, with a valid open-burning permit from the fire department.”

The group of protesters started by dousing the four American flags people brought with rubbing alcohol and lighting them on fire, Ebensberger said.

“Then a FedEx guy came up to us and started yelling at us, using explicit language, telling us to stop,” she said.

“With a fire extinguisher, he was aiming for the flags at first, to put them out,” Osgerby said. “He took two of the flags, but when we kept going, he came back and sprayed the protesters. He grabbed my coat and started shoving me.”

Soon, a couple police officers who had been standing by stepped in, Ebensberger said, primarily to stop the ruckus.

“The police came by to bring down the ruckus,” she said. “They asked us to put out the flames, but at that point we just kind of let them burn out.”

Although protected by the U.S. Constitution, flag burning’s favorability is up for debate among some University of Iowa students.

UI freshman Grant Reese said he is against flag burning.

“I am against people burning the flag because people go and die for our country every day,” he said. “Our flag represents that, but I still think they should protest the way they want.”

UI sophomore Alex Reyes was neutral about the incident but was still against burning the American flag.

“I’m in the middle. It’s in the First Amendment, so they do have the right to protest and exercise their freedom of speech in whichever way they want, but the reason I would be against it would just be the whole effect that you are burning the American flag,” she said.

[Correction: In the Jan. 27 article “Iowa City Flag Burning Raises Some Hackles,” The Daily Iowan incorrectly quoted Kelli Ebensberger as saying “Initially, the protesters wanted to hold a rally on Inauguration Day in the middle of the Ped Mall”. Instead, their protest was inspired by a friend’s protest, also involving flag burning, that was on Jan 20. A corrected version has been posted. The DI regrets the error.]