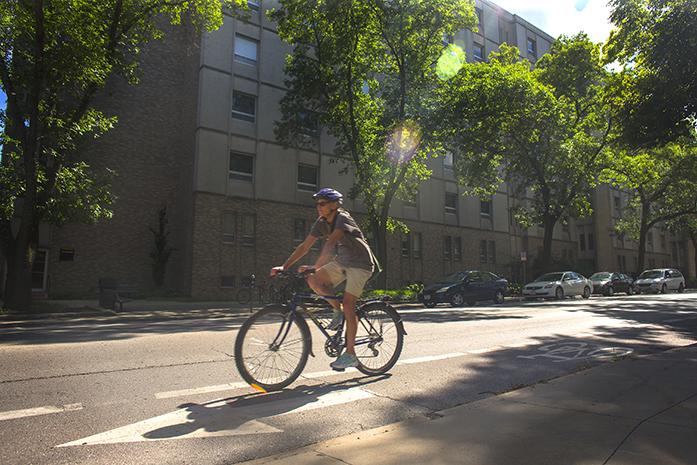 The first community workshop for Iowa City’s Bicycle Master Plan took place on Thursday, and community members had an opportunity to propose changes.

According to a handout, which was distributed Thursday, Iowa City’s bike plan “will capture Iowa City’s vision for a bike-friendly community that allows all residents access to safe, low-stress facilities to meet their daily transportation needs.”

The handout said the plan is to “reflect the community’s shared values and aspirations.”

The goal of Thursday’s meeting was to hear from community members about paths they would like to see once the plan is completed.

Kent Ralston, the transportation planner for Iowa City, kicked off the meting by commenting on the size of crowd.

“I am pleased to see such a large crowd here,” he said.

Ralston then described the background on why the master plan is necessary.

“The last time we were at the City Council meeting, they gave us an initiative to receive a gold medal [from the League of American Bicyclists],” he said.

According to the league’s website, “the Bicycle Friendly America program provides a roadmap, hands-on assistance and recognition for states, communities, universities, and businesses” that promote bicycle friendliness.

Although Iowa City had been the only city in the state to have a silver medal, receiving a gold medal will only improve Iowa City’s reputation of environmental friendliness.

“What [a gold medal] means is that we are a city that has reached certain milestones,” Ralston said.

Ralston then introduced Cynthia Hoyle, an associate planner at Alta Planning and Design who has been involved with the bicycle plan from the beginning.

“We want to find out what you want from the bicycle plan, and we know the needs of the community are diverse,” she said. “There are people who use bicycle paths for both recreation and transportation.”

Hoyle said she wished to find “missing links” between current bicycle paths and access points that to her are not easily accessible to the public.

“A plan is only as good as its execution,” she said.

Marty Shukert, an urban planner with RDG Planning and Design who is assisting with the plan, noted the highly interactive website of the plan. The website has information about the plan as well as a questionnaire that aims to learn information about Iowa City residents’ bicycle habits.

“This survey gives us the opportunity to get to know you,” Shukert said.

Shukert also highlighted the many interactive stations around the room. The stations gave community members the opportunity to review proposed bicycle paths as well as suggest new routes.

“Around the room, we have arbitrarily split up Iowa City to show the detail of the photos,” Shukert said.

Community members then went around to the various stations and with stickers and markers proposed new paths for Iowa City bikers to use.