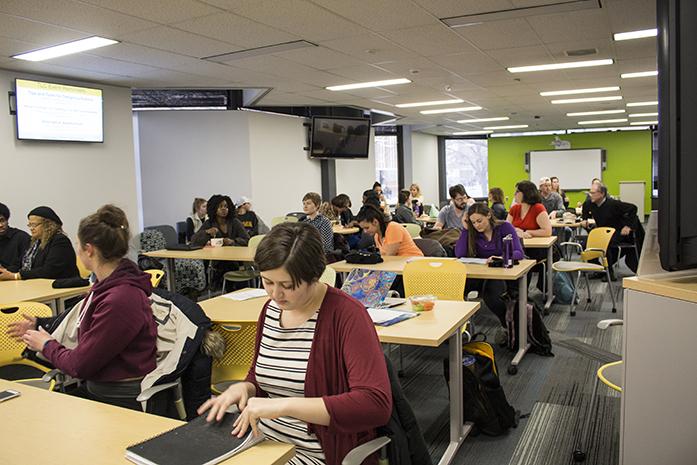 The Daily Iowan; Photos by Alex

Guests listen during the White Privilege 101: Getting in on the Conversations session in the Lindquist Center on Wednesday, Jan. 25, 2017. Dr. Moore presented skills necessary to begin addressing issues of white privilege and oppression in the workshop. (The Daily Iowan/Lily Smith)

Eddie Moore Jr., who received a doctorate from the University of Iowa, returned to his alma mater on Wednesday for the lecture “White Privilege 101: Getting in on the Conversations.”

Moore has had an extensive career in diversity education, and in 1996 founded America and Moore LLC, which aims to provide diversity- and cultural-competency training workshops.

In an enthusiastic manner, Moore began his lecture with a “whassup Hawks?”

Quickly diverging from pleasantries, he opened before his largely white audience with an anecdote that comes from his undergraduate days at Cornell College.

Growing up in a predominately African-American community, Moore said he was shocked when he heard some of his white friends’ renditions of the nursery rhyme “eeny, meeny, miny, moe.”

To his surprise, in their childhood, his friends had been taught that the subsequent line of that rhyme was “catch a n***** by the toe.”

Although this “version” of the nursery rhyme may shock some, Moore used it to emphasize an important point.

“The ages of 0 to 5 are when children are the most impressionable,” Moore said. “The hate we learn in those years can last a lifetime. I say that ‘we learn the most hate in the most innocent state. ”

Moore went on to discuss the white, male society that to him is “still dominant in the everyday lexicon of America.”

Moore asked the audience to think about an example from their lives where the white male society has impacted them — whether it be because of their age, race, sexuality, religion, or other parts of their identity.

Although Moore said racism is more prevalent today than in the past, he said the perpetrators of this racism are not always bad people.

“If you don’t understand the system [of white male dominance], then good people do bad things,” he said.

When this question was asked, Adrien Wing, the College of Law associate dean for international and comparative law, gave her perspective on the current political atmosphere of our nation.

“Even though we have recently seen some of the largest protests in history, I have the feeling we are going to see a reversal in the way people are targeted,” she said.

Wing said this “reversal” may occur when minorities who oppose, say, the Trump administration, may be considered “racist” for their views and subsequently incarcerated.

To Wing, this is “a violation of our basic First Amendment right.”

Moore agreed with Wing’s contention, noting that “in light of what we’re seeing in the current atmosphere, [it] warrants something more than just a talk about white supremacy and white privilege. It’s not just about a changing landscape; we have to understand how to interact together.”

Solomon Worlds, a UI undergraduate student who attended Moore’s talk, said he was there “because I am interested in anything race-related.”

Worlds noted that he had taken a class from Wing, who had mentioned the event to him.