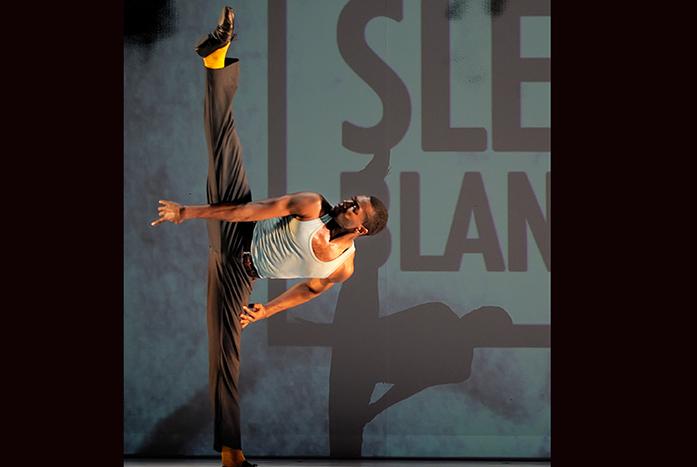 Choreographer Kyle Abraham can be ultimately summarized by its unique ability to transcend convention and push both the medium and the conversation forward. A dancer by training, Abraham incorporates elements of social justice and nods to current political and cultural movements such as Black Lives Matter in his performances.

At 7:30 p.m. Friday, Abraham will arrive at the University of Iowa’s Hancher. His performance, Abraham.In.Motion, will feature the choreographer performing three of his most recent works: “The Quiet Dance,” “Absent Matter,” and “The Gettin’.”

On his website, Abraham, who was the recipient of a $625,000 MacArthur “Genius” Grant in 2013, states that his mission is to “create an evocative interdisciplinary body of work.”

Abraham’s style is famously derived from the synthesis of his exposure at a young age to both the freestyle forms of hip-hop and the strict composures of “classical cello, piano, and the visual arts.” He notes on his website: the purpose “of the movement is to delve into identity in relation to a personal history.”

Hancher Executive Director Charles Swanson noted that Abraham also has a special connection to the University of Iowa community.

“Abraham was inspired to dance after an experience he had seeing Billboards back in 1993,” Swanson said. “Billboards was a piece that was performed by the Joffrey Ballet to music by Prince, commissioned by Hancher Auditorium and the University of Iowa back in 1993.”

Swanson said that serves as a model for how he views Hancher’s role in the world.

“It is wonderful to see work done by Hancher making a difference in the lives of young people,” he said. “I was also fortunate to experience Kyle’s work in New York City over a year ago, and I was moved by his creative talents and the emotions that emerged from the work.”

An unexpected element Abraham uses is the incorporation of live jazz pieces in his newest works. One piece, “Absent Matter,” engages with the Black Lives Matter movement.

At the heart of Abraham’s work is his political sensibility. In a “Life and Times” interview with Quinn Peterson, Abraham described the challenge of attempting to balance his desire to make complex, political statements with his work while retaining a degree of practical accessibility.

“[It’s] the struggle of any performing artist; it’s a constant conversation,” Abraham said. “Things come up. [I’ve] talked to Bill T. Jones about this: When you put a black body on the stage, there’s already an inherent story that’s going to be told. And when you put that black body on stage with any other dancer, the story shifts based on the history that whoever is watching it has already experienced. Whatever your experience is — if you’re seeing a black body and a white body, a black man and a black woman, and black man and a white man — all of those things have their own kind of politic to them.

“The blessing and curse in that is how we can address the subject matter in new ways but in ways that still bring an audience into the work in a way that they feel comfortable talking about it. In “The Watershed,” there’s a scene in which two black men are dancing together pretty intimately while a white man is sitting underneath a tree cutting a piece of watermelon with two black women just sitting there. There’s a lot just in that. Even if they weren’t dancing and it was just the man cutting watermelon, it has its own tension.” One of the collaborators and dancers in Abraham’s company, Connie Shiau, pointed to the show’s opener, a deeply personal piece about the death of Abraham’s father, as being a primer in understanding how Abraham interacts with his work.

“He creates these two different worlds onstage,” Shiau said. “Like this soloist representing his father … and on the other side of the group, dancing, it feels like the soloist is having this ghostlike figure shadowing or protecting the group. The first piece is personal; all pieces are personal, but this one is more about family and looking back on his memories with his father.”

Shiau, who performs as the soloist during the first half of the show, spoke about her desire to convey the “truth behind the piece” as best she can.

“I try to accomplish Kyle’s idea by tapping into my own personal story,” she said. “This is what I do for most of his pieces, that’s the way I connect to the piece. I feel that is the most truthful to myself and the audience. I try to use my personal history to connect with the piece and Kyle’s ideas.”

She said this was one of the most significant aspects of her view of Abraham’s work: its ability to resonate with people no matter their background.

“Everyone has their own personal, unique way to connect,” she said. “I think that’s all really special, because we all come from different backgrounds, families, how we are raised, and I think what makes this special.

“It’s the way we give people room to have imagination and connect with their own stories. It’s important to have people who don’t really watch dance to create your own story and connect to different things in the dance.”

Shiau said one thing that stood out about Abraham before she joined the company in 2013 was his ability to communicate with people.

“He’s really not afraid to touch on those subjects that can be sensitive to people,” she said. “He’s not afraid to start conversations and have people think and talk about it.”

After the 2016 presidential election, Shiau said, the work has taken on different aspects, and some of the meanings have changed as a result. Now, she wants to fight for social justice across a broader range of issues rather than focusing all her energy on one subject in particular.

“After this election, I realized before we were focusing on Black Lives Matter, and bringing up the awareness, and trying to speak out on our opinions,” she said. “Now that the election has happened, I feel personally that I am siding more toward human equality. There are many things that I want to fight about, not just one topic.”

As the U.S. political climate is quickly changing with the inauguration of the 45th president, Shiau said, people seem to feel hopeful after seeing the show — and no one wants to squander hope.

Hancher Programming Director Jacob Yarrow also sees Abraham’s work as something that is needed, especially in light of recent elections.

“Kyle and the company are always asking questions about personal identity and histories,” Yarrow said. “Some of the work speaks directly to experiences of oppression in the United States. The themes of the work are essential and urgent.”