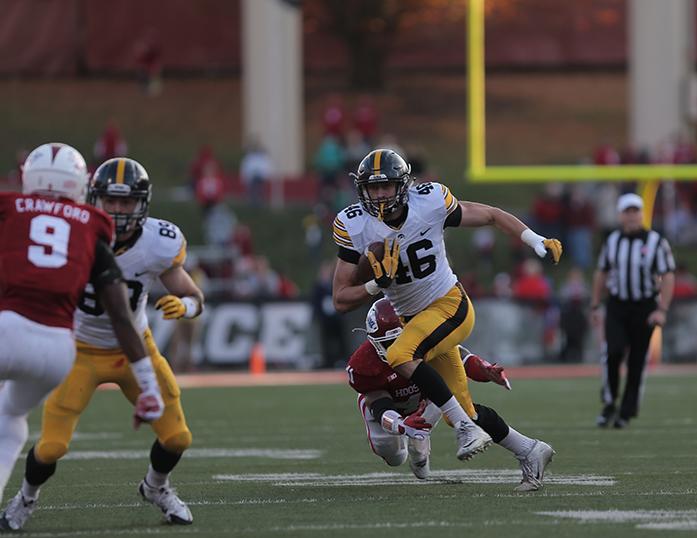 Iowa tight end George Kittle runs for with the ball during the Iowa-Indiana game in Memorial Stadium in Bloomington on Saturday, Nov. 7, 2015. The Hawkeyes stay undefeated after beating the Hoosiers, 35-27. (The Daily Iowan/Margaret Kipsert)

TAMPA, Fla. — At Iowa, good tight-end play will always be a basic building block for the offense.

Tight ends play a number of critical roles, and Hawkeye head coach Kirk Ferentz has always been able to develop the position well. This season was certainly no different, though an injury to starting tight end George Kittle made things a little complicated. Kittle was injured during the Oct. 15 contest, and in his absence, Iowa used Peter Pekar, Nate Wieting, and Noah Fant.

True freshman Fant is the only one of the three with a catch this year.

Kittle was limited in the two following games (Wisconsin and Penn State), then didn’t play against Michigan and Illinois. He did, however, return against Nebraska, though he still wasn’t 100 percent. Now, with more than a month having gone by since Kittle last played, it seems he’s in a much better place — in health — than he was against the Cornhuskers.

And Iowa’s going to need every ounce of its tight-end group to beat Florida in the Outback Bowl Jan. 2. Why? Well, when asked about how to attack the Florida defense through the air, Hawkeye offensive coordinator Greg Davis immediately brought up the Gator secondary.

“They’ve got two corners who are really highly rated … we’ve got to be smart and use our matchups,” Davis said. “We have to play to our advantage and, at some point, win some one-on-one battles.”

It’s common knowledge that Iowa’s receivers haven’t exactly had the best season. They sometimes struggle to break free of coverage and get open. There also isn’t a true ‘home run’ threat at receiver, and the Hawkeyes have had to win without having much in the way of a passing game.

To get around that, Iowa has had to run the ball quite a bit, which has opened up the play-action game. Here is where Kittle and the other Hawkeye tight ends fit in. It’s absolutely true the Gators have excellent corners and safeties. It’s been one of the hallmarks of the Florida program and presents a headache Davis has to plan for.

However, there have been significant injuries to Gator linebackers Jarrad Davis, Alex Anzalone, and David Reese. Considering they would probably be the players drawing the assignment on the tight ends, it’s a huge loss and something the Hawkeyes need to take advantage of.

“It’s a bowl game, so you have weeks to look at this stuff,” Kittle said. “It gets a little annoying watching the same stuff over and over, but it gives you more time to break them down and watch their tendencies.”

Kittle and Fant are both large guys — 6-4 and 6-5 — making them that much larger of a target for C.J. Beathard. It also helps in pass blocking, which is what Iowa has mostly used Pekar and Wieting for this season.

That said, Kittle is undoubtedly the most talented blocker of the group and will be needed to help get the running game going. This is critical, because running the ball and the play-action game both have to work if the Hawkeyes want to beat Florida.

Kittle is good in play action and knows how to get open if the linebackers (which again, are young and backups) start biting on the fakes. Fant has also proved he can catch a football and could be a sneakily good option for Beathard if Iowa starts passing in its two-tight-end formations.

“We know it’s going to be tough, and we have a lot of respect for their defense,” Beathard said. “We just have to focus on what we can do.”