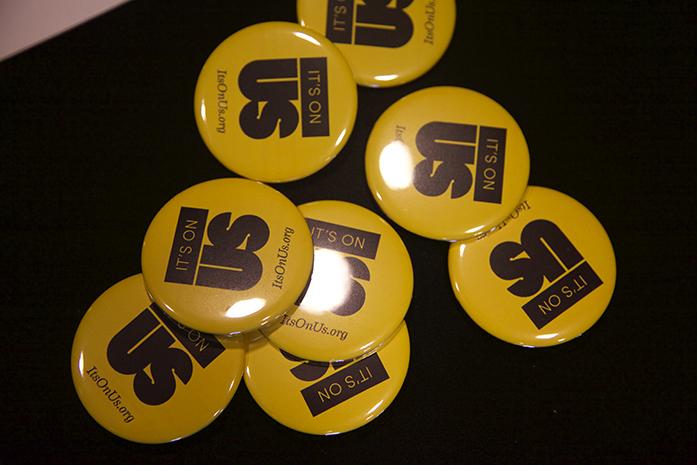 Several student and campus organizations held a Sexual Violence Summit at the IMU called 'It's On Us' on Wednesday, April 22, 2015. The event brought together military leaders, experts, UI students, and community members in an effort to raise awareness on sexual assault. (The Daily Iowan/Mikaela Parrick)

According to a recently released public-service announcement by the University of Iowa Student Government, one in five women and one in 16 men will be sexually assaulted in college.

The announcement is a part of the ongoing It’s On Us campaign, which has been an initiative on campus for many years. The hope behind its release was to re-energize people and remind them about the campaign.

It’s On Us is a national campaign that aims to stop sexual assault and encourages bystander intervention.

UISG President Rachel Zuckerman is one of the student leaders featured in the video.

“[Such announcements] have been really effective for the national It’s On Us campaign. They make them all the time featuring politicians and celebrities, and it’s really a driving concept behind the campaign,” Zuckerman said. “We wanted to emulate that on campus but do it with more familiar faces such as student leaders, student-athletes, and President Harreld. [Having those people involved] really makes it resonate with our own campus.”

Leaders such as UI President Bruce Harreld were happy to participate in voicing their support and taking the pledge for the campaign.

“UISG asked me to participate, and I was glad they did because it’s important to let people know that ending sexual assault and all forms of intimate partner violence is a priority at the highest level of the institution,” Harreld said in a statement to The Daily Iowan.

In the statement, Harreld stressed that bystander information is an important part of prevention.

“Taking the It’s On Us pledge reinforces the message that it requires engagement by the entire campus community to make a difference and change the culture,” Harreld said in the statement.

The video starts with some facts, then moves into prompting action, Zuckerman said.

“The [announcement] is supposed to remind people that this is a communal effort and that they can be a part of the solution,” she said. “We all have a role to play in stopping sexual assault and ending sexual violence on our campus.”

UI freshman Alexia Sanchez was also glad to have the opportunity to be a student figure in the video to voice her support of the message.

“I am a first-year student, and even before coming to college, I heard about all these reports of sexual assault on college campuses, and I knew that in my years here, I didn’t want to live in an environment like that where it could happen to me or someone I know,” Sanchez said. “I got involved with the [announcement] in order to work toward a community where people are positive bystanders and intervene in sexual assault or violence when they are presented with a situation involving it.”

Zuckerman hopes the statistics shared and support from various leaders on campus in the announcement will encourage others to take the It’s On Us pledge and become part of the solution.

“In our current situation, sexual assault is a reality on our campus,” Zuckerman said. “We can’t fix the problem until we confront it, and I think we all need to be aware of the magnitude at which it’s happening on our campus, because when people know how frequently it happens here, that’s when you really motivate them to get involved in being part of the solution.”