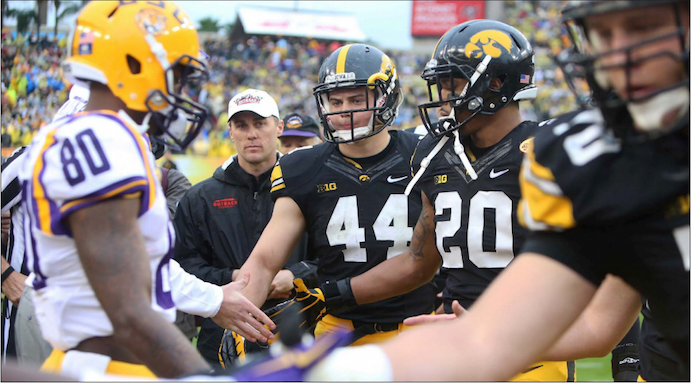 Iowa and LSU captains shake hands before the Outback Bowl in Tampa, Florida, on Jan. 1, 2014. The Hawkeyes fell, 21-14. (The Daily Iowan/File Photo)

For the ninth time in 18 years with Kirk Ferentz at the helm of the Iowa football program, the Hawkeyes are headed to Florida for a bowl game.

It shouldn’t come as a surprise.

Since 2000, Iowa has played in more bowl games in Florida (nine) than any other team in the Big Ten. This season will also mark the fifth time the Hawkeyes have played in the Outback Bowl in that time period, also more than any other school in the conference.

There certainly aren’t any complaints on Iowa’s side of things.

“We’ve been to the Outback Bowl before,” Iowa head coach Kirk Ferentz said. “It’s a great community. The people there are just — they do a great job of making sure both teams have a great experience. You play in a tremendous venue, and it’s just a great city to host a bowl game.”

Some of it, of course, is based on performance. Iowa has been a consistently strong program under Ferentz, which usually puts it in line for better bowl games. Many of those “better” games also happen to be played in Florida.

Right now, the Big Ten is associated with 11 bowl games, though because of restructuring done after the College Football Playoffs were instituted, the conference ties sometimes switch.

The tier’s themselves are a bit complicated. At the top sits the College Football Playoffs, and a committee decides which teams play in the two semifinal games. Those locations switch around to the “New Year’s Six” bowl games.

So how does this factor into which bowl Iowa gets? Well, this season four Big Ten teams got into the top-six games. This simply means more non-top-six bowls were open for the Hawkeyes to have a chance to play in. The Big Ten doesn’t have “official” tiers in its bowl games, but some are higher profile than others. After the top-six games, the Outback Bowl is usually seen as the most sought-after bowl game for a Big Ten school to play in.

It’s the only non-top-six game played on New Year’s Day (though this year on Jan. 2, because Jan. 1 is a Sunday). The Outback is closely followed by the Music City Bowl, the Citrus Bowl, and the Holiday Bowl, in no particular order.

However, because Michigan will play in the Orange Bowl this season, the Citrus Bowl (which used to be known as the Capital One Bowl) doesn’t go to the Big Ten. Instead, it went to Louisville and LSU. As part of the agreement, in years the Orange Bowl does not host a College Football Playoff game and selects a Big Ten team, the Citrus gets to host an ACC team. The SEC is always involved.

Both the Orange Bowl and Citrus Bowl are played in Florida, as is the TaxSlayer Bowl — which used to be known as the Gator Bowl. Again, however, there are stipulations with the TaxSlayer Bowl. In 2015, TaxSlayer signed an agreement with the Big Ten, ACC, and the SEC. Under the agreement, the bowl would take three Big Ten teams and three ACC teams to face an SEC team over a period of six years.

It’s tied in with the Music City Bowl — played in Nashville — which inked a similar agreement. This is why there was so much speculation the Hawkeyes might end up in Nashville this year.

There are, however, other reasons Iowa ended up in a better bowl outside of other teams heading to the top-six Bowls. First, the Hawkeyes beat Nebraska, and badly. This dropped the Cornhuskers to the Music City Bowl, even though they finished with one more win than Iowa.

Minnesota then grabbed the Holiday Bowl (played in San Diego) to round out the upper tier of Big Ten Bowl games. There was speculation Iowa might end up in this game, but it was not to be.

t was not to be. This is where we get the shift from wins and losses to economics. Money has always been a deciding factor and helps explain why the Hawkeyes have made so many trips to Florida since 2000.

“If you look at demographics, a number of people from the state of Iowa who either retire down in Florida or vacation down in Florida,” Iowa Athletics Director Gary Barta said. “There are more Iowa alums and vacationers in Florida this time of year than there are in California.”

Herein lies one of the most important reasons Iowa has gone to one California bowl and two Arizona bowls in the last 16 years, despite the Big Ten having several long-standing agreements with bowls in the western part of the United States. Money. It’s big part of the reason Iowa will be in Tampa and not San Diego.

When Iowa went to the Orange Bowl in 2009, Larry Gautier, a member of the committee for that game estimated there are 30,000 to 40,000 Iowans that call Florida home — not an insignificant number.

There are reasons for this, of course.

It gets cold in the winter, for starters, and it’s not uncommon for people to split time living in Iowa and Florida during the year — especially retirees. There’s tax reasons for doing this, though many simply want to escape the chilly Iowa winters. It’s not a massive demographic, but with reasonably priced tickets, it doesn’t take much to get them to drive a few in-state miles to go to a game involving the Hawkeyes.

Adding in that Iowa fans have a reputation of traveling extremely well to bowl games anyway, it all starts to make quite a bit of sense.

“Lot of alums, a lot of grads, a lot of boosters from the Big Ten throughout the Midwest are used to driving down Interstate 75,” Outback Bowl President and CEO Jim McVay said. “You have a big contingent of fans, and it makes perfect, because they’d want to visit here for a bowl game.”

It’s been a fruitful relationship for both sides and plenty of money for Iowa’s coffers. The Outback Bowl has the highest non-NY6 payout, which comes to a cool $7.2 million.

That is split between both teams and then split again among the conference teams, but it should be noted that Tennessee took home $3.05 million from last year’s Outback Bowl.

To the players themselves, the process boils down to a couple things. Bowls, at the heart, are about giving an enjoyable vacation after a long season to go along with one last exhibition football game.

Yes, they certainly take their opponent seriously and expect to win the game, but judging by the lead up to this year’s Outback Bowl (Iowa has a day at Busch Gardens, a bowling night, a beach day, and a night at a Tampa Bay Lightning game) it would seem to be reasonable to believe the Hawkeyes are supposed to enjoy themselves.

Florida, as it turns out, is a pretty good place to do that.

“It’s exciting,” running back LeShun Daniels Jr. said. “To go to a nice bowl such as the Outback Bowl, it’s going to be in a nice environment and against a high-quality opponent.

“It’s going to be a fun time, and we’re ready for the challenge.”