Fernandez: Pipeline win could be fleeting 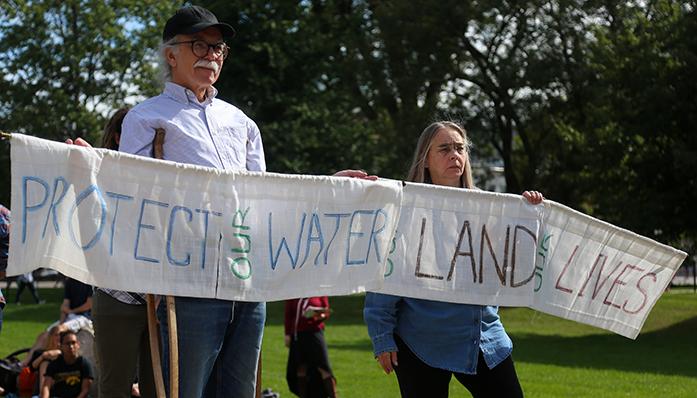 Locals participate in a peaceful protest regarding the Dakota Access Pipeline at the Pentacrest on Monday, October 10, 2016. The protest happened from 12:30-1:30 that contained an open mic allowing people to speak their opinions. (The Daily Iowan/ Alex Kroeze)

For many of the people on my Facebook timeline, the Army Corps of Engineers’ announcement to withhold the final easement needed to complete the construction of the Dakota Access Pipeline beneath the Missouri River was a vehicle to prove one’s commitment to a charitable cause and to voice their relief that it’s all finally over. As I scrolled down my feed shortly after hearing the news, I saw emotional, essay-length statuses from people I’d never once heard mention the pipeline. I saw the article shared and captioned, “I can’t believe we finally won,” by white middle-class acquaintances and wondered what exactly we’d won for ourselves besides a pat on the back by witnessing the tides change in this long-standing war over the lands and rights of Native American peoples.

The Dakota Access Pipeline became controversial national news after media coverage of the water protecters’ suffering at the hands of encroaching police forces inspired the public to share their plight, urging each other to donate and spread awareness. While we all tweeted #NODAPL, the federal government was counting on our fickle attention spans to approve the permits for several other pipelines the Trans Pecos and Comanche Trail in Texas, the Sabal Trail Transmission in Florida and the sprawling Alberta Clipper pipeline are just a few.

The American public’s apparent inability to focus on more than one crisis at once has always worked in the favor of bureaucrats, who routinely pause projects when the heat is on until the time is right again to issue a green light. On Sept. 9, the title “U.S. Suspends Construction on North Dakota Pipeline” beneath photos of celebrating water protecters soothed our fears and effectively suspended the passion of the public until ongoing construction and protest revealed the reality of the situation. This latest announcement could be no different.

Sioux tribal Chairman David Archambault II is far from complacent. Archambault told Reuters, “With the new administration coming in, it’s an opportune time for us to educate the president-elect and help him realize that what he has achieved is only because of the cost that our people have paid.” President-elect Donald Trump, who has voiced his support of the pipeline in the past, seems unbothered by the implications of Archambault’s words.

According to PBS, Trump’s new assignment to head of the Environmental Protection Agency, Scott Pruitt, has plans to review energy regulations with the intention of  “paring back” some. The president-elect’s recently established Native American Coalition reads like a business model, with plans to “ease restrictions on American energy reserves worth trillions of dollars.” How Trump plans on benefiting Native Americans through the continued exploitation of the “abundant natural resources” on their lands is unclear.

While Energy Transfer Partners, the company behind the Dakota pipeling, waits patiently for President Obama to leave office, the pressure is on him to protect the lands by dubbing them a national monument. The Army Corps is aware that Energy Transfer has no problem skirting the rules, stating that its  “policy decision” does “not alter the Army’s position that the Corps’ prior reviews and actions have comported with legal requirements.” Rather than sitting around and hoping that it’s all over and Santa is real, we must continue to shed light on the decisions around the pipeline as well as stand in solidarity with protesters at the various other pipelines under construction now. As long as Energy Transfer is “fully committed to ensuring that this vital project is brought to completion,” we should be fully committed to preventing it and everything like it.