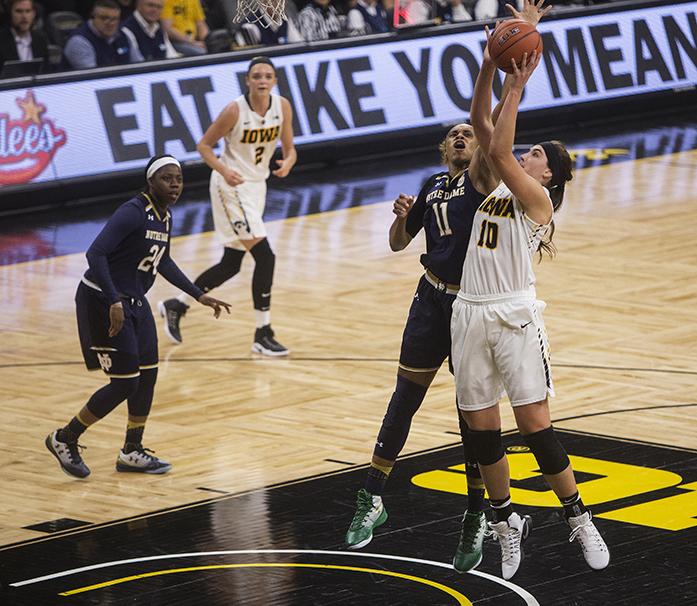 Iowa's no. 10 Megan Gustafson shoots the ball as Notre Dame's no. 11 Brianna Turner tries to block during a basketball match at the Carver Hawkeye Arena in Iowa City on Wednesday, Nov. 30, 2016. Notre Dame defeated Iowa 73-58. (The Daily Iowan/Ting Xuan Tan)

The Iowa women’s basketball team sits at 6-3, most recently defeating Northern Iowa by a whopping 49 points.  Next on the schedule is also a familiar in-state foe, Iowa State.

Recently, the Hawkeyes seem to be clicking on all cylinders with close losses to top-10 teams UCLA and Notre Dame and two blowout wins against UNI and James Madison.  Iowa has been gaining a swagger these last four games, and it all started with the play of senior Ally Disterhoft.

Iowa senior Ally Disterhoft is not exactly best known for her ability to be a 3-point sharpshooter.  She is more comfortable attacking the basket, finishing strong at the rim, and getting out in transition.

But these last four games are really starting to make fans question whether Disterhoft has now become the complete offensive package.

Disterhoft is 11-of-15 from 3-point range in these last four games, the most impressive stat line this year for the Hawkeyes.

“I have been doing a better job of not second-guessing myself on the release and trusting that my teammates are going to get me the ball when I’m open,” Disterhoft said. “It is the same for me going into every game, stepping up and being ready to shoot those shots when they are open.”

Something shooters struggle with a lot is confidence, and Disterhoft does not appear to be lacking in that at the moment.

Her ability to consistently make 3-point shots only enhances her offensive game even more, because now defenders have to respect her shooting ability and play her close.

This will allow Disterhoft more opportunities to shot fake and blow by her defenders and do what she loves most — attack the rim.

Disterhoft is not the only starter to recently improve her offensive game.

Bre Cera can be ‘Gamechanger’

In the game versus Northern Iowa, starting freshman guard Bre Cera went 3-of-4 on field goals with 7 points.

She was able to consistently hit open jump shots when other players drove and kicked the ball out to her.  This has been something she has struggled with so far this season, which has allowed for defenders to sag off of her and clog the paint.

Iowa head coach Lisa Bluder made it clear and simple when she said, “You’re harder to guard when everybody’s a weapon. Definitely having [Cera] as an offensive weapon makes us a better team.”

If Cera is able to make open jumpers, her defender will have to respect her shot, which will mean more room in the paint for sophomore Megan Gustafson to work, which is pivotal because Iowa’s offense makes or breaks on the play of Gustafson.

If Gustafson is not able to perform to her potential, and there will be games this happens, the bench must be there to pick up the slack and as of recently it has.