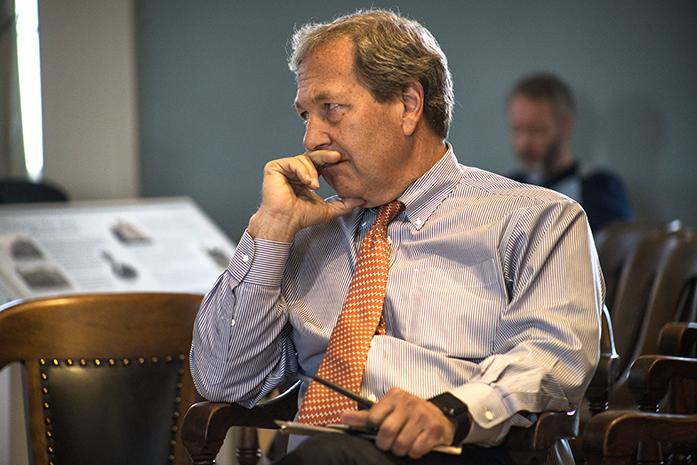 UI president Bruce Harreld listens to the other panelists at the Old Capitol Museum on Monday, May 2, 2016. The panels discussed numerous topics including social justice and themed semester program. (The Daily Iowan/Peter Kim)

Despite the spread of anti-immigrant rhetoric during the election cycle, the University of Iowa is striving to remain a safe and inclusive campus for all students.

UI President Bruce Harreld added his name to a statement released by Pomona College in support of Deferred Action for Childhood Arrivals, a national immigration policy ordered by President Obama as an executive action allowing certain undocumented immigrants to receive a renewable two-year work permit and be exempt from deportation. President-elect Donald Trump has vowed to repeal the action.

As of Nov. 28, the statement Harreld signed onto had received support from 300 university presidents. Those who sign onto the statement are “urging business, civic, religious and nonprofit sectors to join them in supporting [the action] and undocumented immigrant students,” according to the statement.

“As educational leaders, we are committed to upholding free inquiry and education in our colleges and universities, and to providing the opportunity for all our students to pursue their learning and life goals,” the statement said.

Considering the nationwide hate-fueled incidents that have been reported since the election, UI student Fidel Estrada, the president of the UI chapter of DREAM Iowa, an immigrant advocacy organization, said Harreld’s show of support is meaningful to the students affected by the executive action.

The Daily Iowan has previously reported that an anonymous note posted on a Iowa City Sudanese-American family’s front door on Nov. 11 caused an uproar in the community.

“The energy that’s been given off in this past year has been negative toward the immigrant communities,” Estrada said. “We’re really glad that people such as Bruce are coming out to counter that and send messages of positivity, and that people are standing up for immigrants and making an effort to make it safe here.”

“I think it’s an issue that President Harreld and other administrators — myself included — are going to need to be willing to fight on if it comes to that point, to continue to assert that undocumented students — like other students — bring incredible value to our institution, and we need to protect their right to learn in the community,” she said.

While the students interviewed by The Daily Iowan agreed Harreld’s signing of the statement was a significant step in the right direction, they expressed split opinions on the benefits of making the UI a sanctuary campus. This is a designation for a college or university in the U.S. that adopts policies to protect students who are undocumented immigrants.

Around the country, universities have been making petitions for its institutions to become sanctuary campuses, such as the University of Minnesota, Stanford University, and Texas State University.

UI student Brad Pector, also a former DI employee, wrote the petition for the UI, calling on Harreld to give the UI this designation.

“Declaring a sanctuary campus and demanding that the University of Iowa isn’t going to deal with [Immigration and Customs Enforcement], and we’re not going to deal with a Muslim registry is a very powerful statement against forces of power who would like to take advantage of us and split us apart,” he said.

Zuckerman said the designation is not entirely necessary, because the UI already functions as if it were a sanctuary campus and she doesn’t see that changing, regardless of federal policy.

Making Iowa City a sanctuary city might be a better course of action, Zuckerman said. Pector also said he hopes to extend the sanctuary designation to the city, since the UI is such a big part of the city itself.

Estrada and Zuckerman will meet on Friday to discuss possible courses of action to take regarding undocumented students, she said. Although the conversation might alter views on the matter, Estrada said he would like to see the sanctuary campus designation be made so students feel as if they are welcome on campus.

“Undocumented students here in Iowa are going to school here … just the same as any other student,” he said. “They’re coming here to get an education, and they have the same dreams to get a career and have a better future. They can have the same goals and aspirations as other students.”